Nothing for us here, say youth at 10-day job fair organised by Punjab government

Jalandhar, August 31: The 10-day job fair organised for polytechnic and ITI passouts at CT Institutes by the state government as a part of its “ghar ghar naukri” campaign has not brought much cheer for the youth. 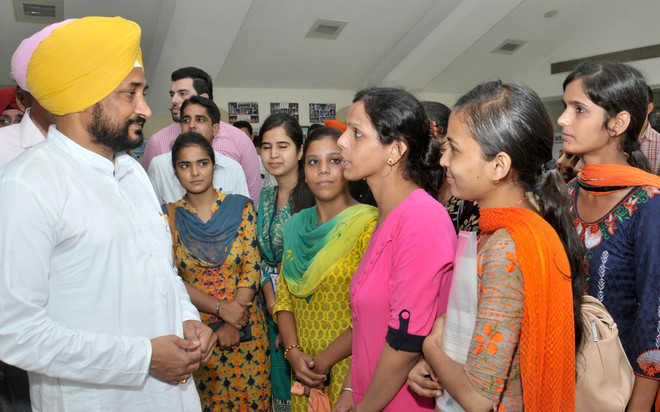 Even on the seventh day today, most aspirants who travelled to the campus here returned disillusioned. Their grouse is that there are a few companies to match their profile and that the monthly salary offered is in the range of Rs 9,000 and Rs 11,000.
Navjot Kaur of Behram and Parneet from Phillaur, both diploma holders in computer sciences, said: “We have appeared for five-six interviews since August 21 when the job fair started. The package being offered is too low that we cannot even meet the expenses of our commuting to the company office. This is our third visit to the campus. We came on August 22 as well, but no company turned up that day and we left after submitting our resume.”
Gurinder Singh from Hoshiarpur, an ITI passout from mechanical engineering diploma, said: “There were just four companies here to suit my qualification — John Dere, HR International, Vishal Tools and Nova Fitness. So far, there has been no offer from any of them. I might have to return disappointed. I had thought that I would have a fair chance here than at my institute placement fair, but I was under a wrong impression.”
Sajan Sharma, Sukhwinder Kumar and Aman Kalia from Marar village of Kapurthala, said: “We were expecting something better than what we are already getting. A company requiring mechanical engineering diploma holder offered us Rs 9,200 salary with three-year bond. We rejected it out rightly. Another Jalandhar-based company wanted only a local applicant and did not consider us even for interview even as we told them that we reside just about 30 km away.”
Even BTech students, who appeared for job interviews at IK Gujral Punjab Technical University, were not much satisfied. They even approached Technical Education Minister Charanjit Channi, who visited the campus today, over fewer choices. The minister told them not to always look for Infosys and HCL and think of other openings too.