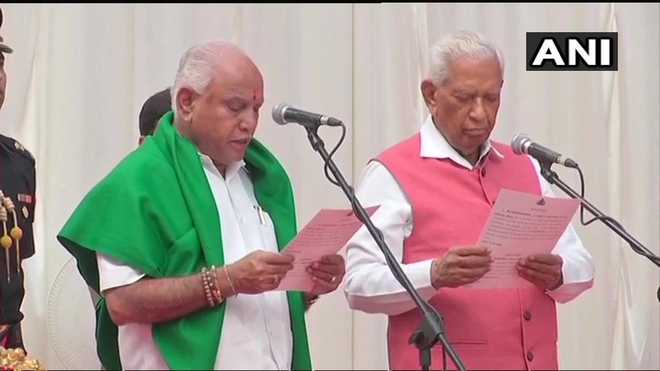 Bengaluru May 17: BJP legislature party leader BS Yeddyurappa was on Thursday sworn in as the chief minister of Karnataka for a second time, after an overnight high-voltage legal battle in the Supreme Court.

The 75-year-old Lingayat strongman was administered the oath of office and secrecy by Governor Vajubhai Vala at a ceremony at Raj Bhavan amid loud cheering by his supporters.

Yeddyurappa was administered the oath alone, hours after the Supreme Court refused to stay his swearing-in.

In a rare post-midnight courtroom battle, the Congress-JD(S) combine made a desperate legal push to stall the government formation.

Yeddyurappa has 15 days to prove his majority in the Assembly.The BJP has 104 MLAs in the House, eight short of the magic figure of 112.

Polling was held in 222 of the state’s 224 seats. Election to the Jayanagar seat was countermanded following the death of the BJP candidate, while polling was deferred to May 28 for RR Nagar seat due to alleged electoral malpractices.