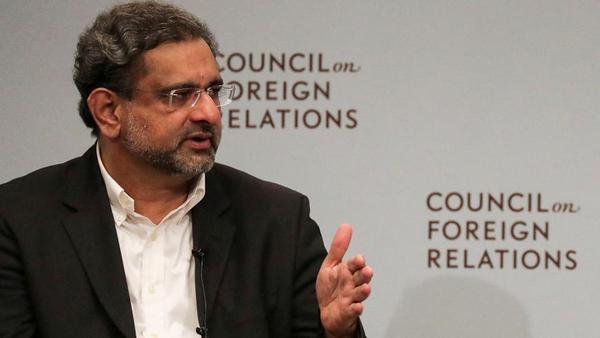 New York, Sep 21: Pakistan prime minister Shahid Khaqan Abbasi on Thursday demanded the implementation of the UN Security Council resolution on Kashmir, asserting that his country will continue to support the right of self-determination in the restive state.

“I think the basic issue is Kashmir. The implementation of the Security Council resolution will be a great starting point that will help address each other’s concerns and provide peace to the region and between Pakistan and India. That’s the core issue between the two countries,” Abbasi said at an event organised by the Council on Foreign Relations in New York.

Abbasi was responding to a question from Congresswoman Carolyn Maloney, who sought to know from him what India and Pakistan needed to do to achieve peace.

Pakistan has long pressed for the implementation of decades-old UN resolutions calling for a plebiscite in the region among other steps to resolve the Kashmir issue.

Abbasi, who is in New York to attend the annual UN General Assembly session and will deliver his speech on Thursday, asked the world community to honour and defend the fundamental right to self-determination of the people of Jammu and Kashmir.

Abbasi said the two neighbours need to engage on core issues and that he wants “normal relation” with India.

“Those have to be resolved first, and Kashmir is the basic core issue there. But unfortunately, in the recent past, the aggression from India has continued unabated, and that is not acceptable. And we want normal relations with India, but on the basis of trust and respect,” he said in response to another question.

When asked about a business role for India, he said: “That’s up to them. All countries have the right to trade with each other, invest in other countries. So if they want to do that—and India has invested in Afghanistan in the past,” Abbasi said.

The Pakistan prime minister dismissed the question of links between the Haqqani network and Pakistan’s intelligence agency, the ISI.

“… We do not condone any activities by any organisation to pose a terrorist threat within Pakistan or to export it to other countries,” Abbasi said.

He also said he saw “zero” political or military role for India in Afghanistan, remarks that came weeks after US president Donald Trump sought more help from New Delhi to bring peace and stability in the war-torn country.

Abbasi said nobody wants peace in Afghanistan more than Pakistan.

“This perception that there are (terrorist) sanctuaries is absolutely not correct. We have defeated the enemy on our own territory. We have destroyed the sanctuaries,” he said.