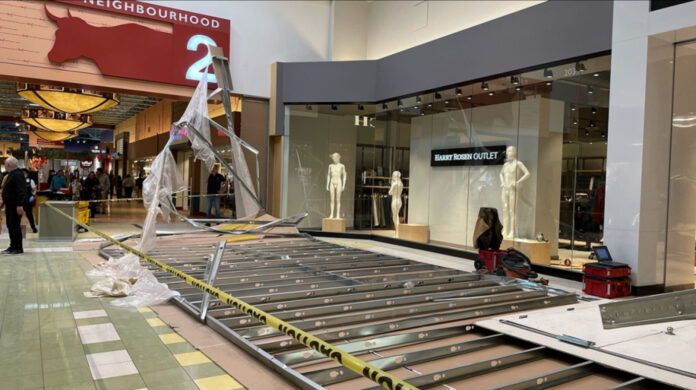 The incident happened at 1:40 p.m. near the Harry Rosen store and a Tim Horton’s in the mall, located in Balzac, just north of Calgary.

One woman and her grandchild were struck by the wall, leaving the family shaken.

The baby’s mother was nearby and wasn’t hit.

The family was too shaken up to speak on camera, but the grandmother said she believed the stroller prevented them from being injured.

CrossIron marketing manager Joel Tatlow said the wall was a temporary wall, used when a store is under construction.

Rockyview Fire Department and emergency services were called to the scene. There were no injuries. One woman and a child were assessed and released. At 3 p.m., occupational safety released the scene to be cleaned up,” he said in a written statement.

“The safety and security of staff, customers, and tenants is a top priority and we take proactive safety measures to provide a safe experience at CrossIron Mills,” Tatlow added. “We have a highly-trained security staff in place and we appreciate their diligent response to this incident.”

“CrossIron Mills Mall is a very busy mall. And so, this is a potential for anytime you’re in public space there could be potential for injuries so this is something that occupational health and safety will look into,” said Sgt. Jeffrey Campbell of Airdrie RCMP.