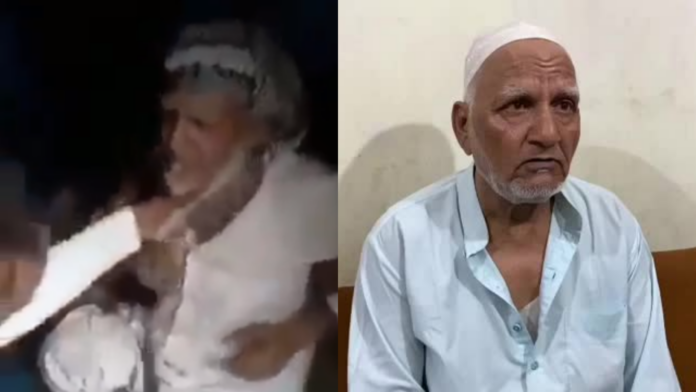 Police here have booked Twitter, a news portal and six people for circulating a video in which an elderly Muslim man says he was thrashed and asked to chant “Jai Shri Ram”.

Police claimed that it was done to create communal unrest.

“These people did not verify the truth of the matter and shared it online with a communal angle with an intention to disrupt public peace and create a divide between religious groups,” the FIR states.

The FIR was lodged at the Loni Border police station in Ghaziabad around 11.30 pm on Tuesday on the basis of a complaint lodged by a local policeman.

Meanwhile, the Press Club of India (PCI) also took note of the police action and demanded that the FIR naming the journalists should be quashed because it shows “vendetta” of the Ghaziabad police to create a “sense of terror” in the media and society at large.

“The PCI appeals to the government of UP to intervene in the matter at the earliest to ensure that journalists are not made easy targets of police high handedness by filing FIR against them,” it said in a statement.

In a video clip, which surfaced on social media on June 14, the elderly Muslim man, Abdul Shamad Saifi, is heard saying he was thrashed by some young men and asked to chant “Jai Shri Ram”.

However, the Ghaziabad police have ruled out a communal angle. It said the accused were unhappy about a “tabeez” (amulet) he sold to them.

Police are also looking for others involved in the case including those identified as Polly, Himanshu, Arif and Murshid, he said.

The FIR states that the Ghaziabad police had issued a clarification statement with facts of the incident but despite that the accused did not remove the video from their Twitter handles.

The police had also clarified that those who attacked Saifi included Hindu as well as Muslim men and the incident was a result of personal issues between them and not communal, it said.

“Besides, Twitter Inc and Twitter Communications India did not take any measures to remove their tweets,” it added.

The FIR has been lodged under Sections 153 (wantonly giving provocation with intent to cause riot), 153A (promoting enmity between groups on ground of religion, class etc), 295A (Deliberate and malicious acts, intended to outrage religious feelings of any class by insulting its religion or religious belief) and 120B (criminal conspiracy) of the Indian Penal Code (IPC).

Earlier on Tuesday, Congress leader Rahul Gandhi had said: “I am not willing to accept that true devotees of Lord Ram can do such a thing”.

“Such cruelty is far removed from humanity and is shameful for both society and religion,” the former Congress chief had tweeted in Hindi tagging a news report on the Ghaziabad incident.

Sharing a screenshot of Gandhi’s tweet, Adityanath had said, “The first teaching of Lord Ram is speak the truth, which you have never done in your life”.

“You should be ashamed that even after the police telling the truth you are spreading poison in society. In the greed of power, (you) are shaming humanity. Stop humiliating and defaming the people of Uttar Pradesh,” the chief minister had said in a tweet in Hindi.