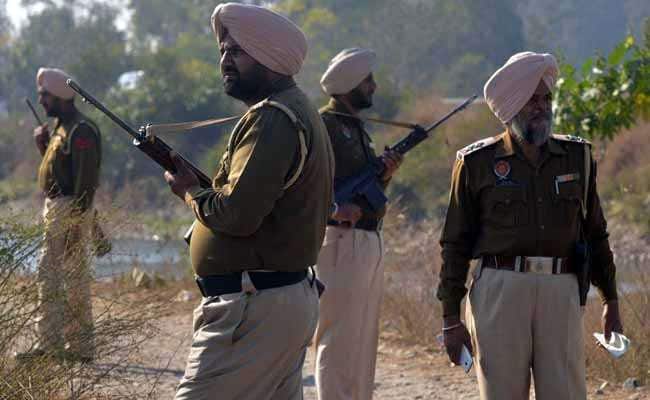 Further tightening the noose around gangsters in the state, the Punjab Police have busted a gang of international arms smugglers and highway robbers, with the arrest of two dreaded gangsters, including proclaimed offender Gurpreet Singh @ Gora and Germanjeet Singh.

A bullet-proof jacket, along with a major haul of arms and ammunition smuggled, has been seized by the police from the gangsters, who were allegedly also involved in smuggling of weapons from across the border into India.

The duo were arrested by the Jalandhar (Rural) Police from Bhogpur and recovered a bullet proof jacket, and a .455 bore Pistol provided by gangster Gopi Ghanshampuriya, two Glock 09 mm Pistols with four live cartridges, one pump action 12 bore Rifle, one .32 bore Revolver, one .30 bore Pistol and live cartridges were recovered from the gangsters, DGP Dinkar Gupta disclosed, adding that the Verna car they were travelling was also seized.

Gora is already facing criminal charges in 14 cases in various districts of Punjab for attempt to murder, assault, snatching, dacoity, gang war and others, and is a PO in 13 of these cases, said Gupta.

Giving details of the operation, Navjot Mahal, SSP Jalandhar Rural said that police had got a tip-off that Gurpreet Singh @ Gora S/O Chamkaur Singh R/O Vill Bariar PS Ghumaan, and his aide German Jeet Singh S/O Harbhajan Singh R/O Vill Jawandpur PS Vairowal, were going towards Behram in a Verna car no. PB 46 Q 49512 and were planning to commit some heinous crime, such as snatching vehicles from highway at gunpoint. A special surveillance was quickly organised at check posts in the entire area, and a team of special staff of Jalandhar Rural Police was able to apprehend the car- borne assailants.

The team recovered from the duo foreign and country made weapons, including one Pistol .30 Bore with four live rounds, one revolver .32 Bore with six live rounds, a bulletproof jacket and the Verna car used by them in various crimes from the spot.

Gupta said the disclosure statement made before police by Gurpreet Singh further led to the recovery of 12 Bore Pump Action Rifle with five live cartridges, two 9mm Glock Pistols (Made in Austria) with two live rounds (etched with Pakistan Ordinance Factory markings), one revolver .455 bore with five live rounds, 19 rounds of .32 bore revolver and eight rounds of .32 bore special revolver. All these weapons were packed in a plastic pipe and buried in earth on canal bank near Rayyia (Amritsar).

Gupta said during preliminary interrogations, Gora revealed that he was in close contact with Baljinder Singh Billa Mandiala, who was well connected with Pakistan based drug and arms smugglers, Mirza and Ahmdeen, and had received many consignments of weapons and drugs from them in the Ferozpur area. Gupta said Pakistani Drug/ Arms smuggler Mirza has been working as courier on Indo-Pak border for Khalistan Libration Force and had smuggled many weapon consignments to Indian territory.

It has also been learned that a part of 05 AK-47 weapon consignment recovered from the Indo-Pak border on September 24, 2019 by STF Punjab, was also meant for this apprehended criminal Billa Mandiala.

Moreover, most of the weapons recovered from Billa Mandiala also came from Indo-Pak border and police is also investigating the role of militants in the supply chain of illegal weapons which is still a part of investigation as police is suspecting his involvement with Pakistan based militant groups.

The DGP said Gurpreet Singh @ Gora was a member of Billa gang run by another notorious gangster Baljinder Singh @ Billa, currently lodged in jail. Through his mentor, Gora was in touch with Pakistan-based illegal arms smugglers and was regularly dealing with them to smuggle in foreign-made weapons to the Indian side.

The gang was involved in many cases of Highway Car Robberies, Ransom and Extortion, said Gupta, adding that after getting bail in cases registered against him, Gora used to live in a Gurudwara at Nanded, Pune and Himachal Pradesh in a clandestine manner.

Gupta said that the Verna car recovered from spot by Police belongs to Germanjeet Singh, who was instrumental in protecting Gurpreet from the Police glare and used to provide vehicle to him for crime.