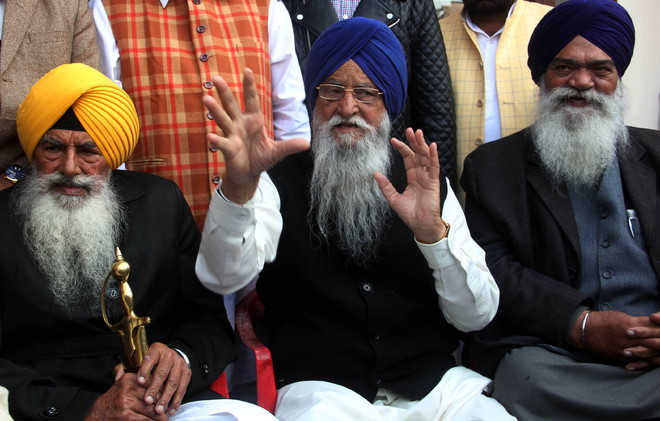 Bathinda, January 24: Shiromani Akali Dal (Taksali) president Ranjit Singh Brahmpura on Wednesday said talks with Aam Aadmi Party were still on and they were hopeful that the party would join the Punjab Democratic Alliance (PDA) in the interest of the state ahead of the Lok Sabha elections.

Talking to the mediapersons, Brahmpura admitted that AAP leader Bhagwant Mann had expressed his reservations on joining the PDA due to the fact that Bholath MLA Sukhpal Khaira was a part of it. “Like Khaira, the AAP leadership should also show magnanimity and join the alliance to ensure that the Opposition’s vote doesn’t get divided,” he said.

Brahmpura hit out at the SAD chief Sukhbir Badal for his remark regarding the former’s alleged links with the Congress. He said: “I challenge Sukhbir to appear before Akal Takht along with his family and so will I. His statement reflects the frustration in the Akali Dal as they don’t have any issue against us. I have been an Akali for more than 60 years during which I always led from the front and even went to jail while being part of different morchas. I can never think of having any links with the Congress.”

Party leader Sewa Singh Sekhwan alleged that the Badals were hand in glove with the family of Capt Amarinder Singh.

Brahmpura said they would also contest the SGPC and Assembly elections. Brahmpura targeted both the Congress as well as the SAD, blaming them for ruining the state. Later, the SAD (Taksali) leaders met former Takht Sri Damdama Sahib Jathedar Balwant Singh Nandgarh who extended full support to them.

Bains said in the PDA meeting yesterday, he had told the other leaders that being a primary and founder member of the PDA, he would not tolerate the inclusion of AAP into the alliance due to its convener Arvind Kejriwal’s apology to former SAD minister Bikram Majithia.

Kejriwal spoke against Majithia in rallies saying that he would put him in jail on coming to power. Later, he apologised to him, which showed his double standards, Bains alleged.