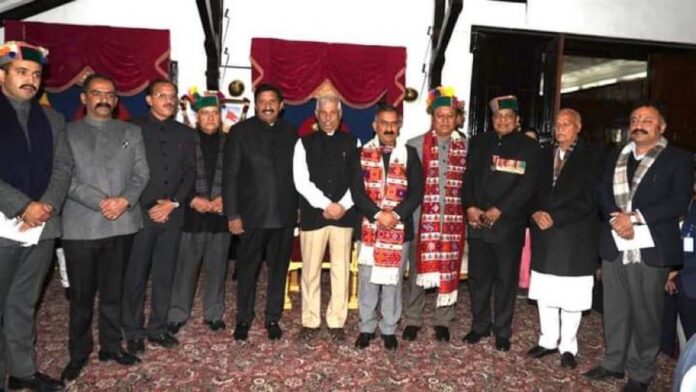 The strength of the Cabinet has now risen to nine. Only Sukhu and his deputy Mukesh Agnihotri were sworn in on December 11 following the Congress’ win in the hill state.

Three berths are still vacant as the maximum number of ministers, including the Chief Minister, cannot exceed 12. Governor Rajendra Vishwanath Arlekar administered the oath of office to the newly inducted ministers at Raj Bhawan.

Sukhu has apparently rewarded party loyalists and his close associates in this first Cabinet expansion.

Shandil, Negi and Kumar, on the other hand, are among the senior-most leaders in the party while Vikramaditya apparently has been included to keep factionalism at bay. Except Vikramaditya Singh, who is a two-time MLA, all other inductees in the Council of Ministers have won three or more elections.

Shimla district with seven MLAs has been given the lion’s share in the Cabinet with three ministers while Bilaspur, Mandi, Kullu and Lahaul and Spiti districts are unrepresented in the Cabinet. Kangra, which gave 10 seats to the party, has got just one minister.

CM Sukhu also appointed six Chief Parliamentary Secretaries (CPS). Leader of Opposition in the Assembly Jai Ram Thakur alleged that the Congress government had failed to give adequate representation to various regions in the Cabinet. The former CM also criticised the government over the appointment of six CPS, saying it would put a burden of crores of rupees on the state exchequer.