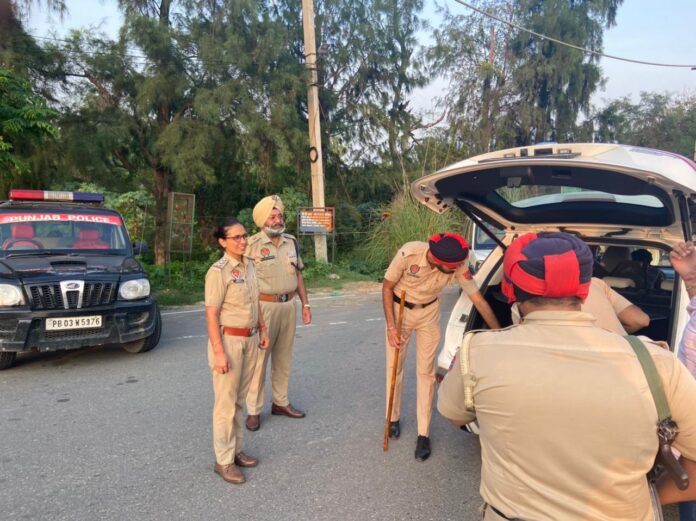 In yet another move aimed at giving loud and clear message of the Punjab Chief Minister Bhagwant Mann to anti-social elements that they have no place in the state, Punjab Police, on Saturday, have conducted a Special Vehicle Checking Operations in all the 28 Police districts. Director General of Police (DGP) Punjab Gaurav Yadav has himself gone in the field to conduct random checking of different Naka Points in Ropar Range.

Over 800 well-coordinated Nakas— including 56 Inter-State, 250 Inter-District, 53 Hi-Tech and 427 City sealing, involving over 10000 Police Personnel, were set-up in the state with an aim to make Punjab free from Drugs and Gangsters.

The operation was conducted in a synchronised manner from 4pm to 7pm across the state and ADGP/IGP/DIG rank officers from Punjab Police Headquarters were deputed in each Police district to personally supervise the operation. All the CPs/SSPs were asked to mobilise a maximum number of officers and manpower for this operation to lay strong ‘nakas’ at district/city sealing points under the supervision of Gazetted officers/SHOs.

The DGP said that during an operation, a thorough search of suspected vehicles/persons was ensured while ensuring minimum inconvenience was caused to the general public. “We had strictly instructed all the Police Personnel to deal with every commuter in a friendly and polite manner while checking their vehicle during the course of this operation,” he added.

DGP Gaurav Yadav, who had joined ADGP Law and Order Naresh Arora and SSP Ropar Sandeep Garg in Ropar to personally supervise the checking of vehicles, said that they have strict directions from Punjab Chief Minister Bhagwant Mann to root out all the anti-social elements from the state to make Punjab a crime-free state. “Such operations would continue till the menace of drugs and Gangsters wiped out from Punjab,” he said.

He reiterated his warning to all the anti-social elements to voluntarily leave the state otherwise the Punjab Police will not spare them at any cost. These types of operations are part of the basic policing which includes keeping vigil in vulnerable spots and advance preparation to tackle any untoward situation, he added.

Meanwhile, such operations will also help in showing the police presence in the field and boost confidence among common people.