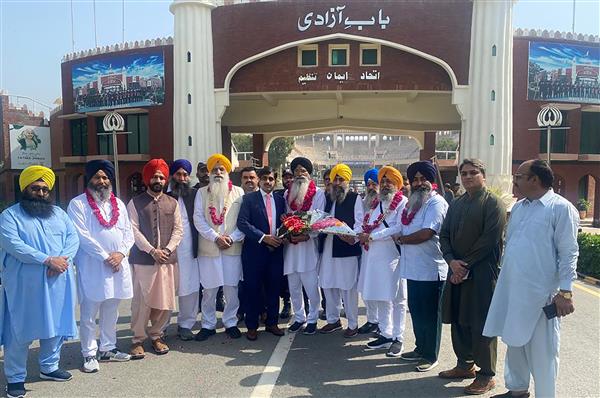 The event falls on October 30 and is commemorated at Gurdwara Panja Sahib in Hasan Abdal, Rawalpindi, which is attended by ‘Nanaknaam leva’ devotees from all over the world.

Meeting has been scheduled at Lahore with their Pakistani counterparts and the officials of the Evacuee Trust Property Board (ETPB), a statutory board that administers religious, educational and charitable trusts in Pakistan.

Ruby said that special visas were procured from Pakistan and the meeting has been confirmed with the Chairman of the ETPB and the representatives of the Pakistan Sikh Gurdwara Parbandhak Committee.

Earlier, the SGPC officials were a dejected lot due to lukewarm response from the Pakistan authorities on the request letter for granting them visas. Recently, they had met the officials of the Pakistan Embassy at New Delhi too.

SGPC intends to conduct Gurmat programmes at Gurdwara Panja Sahib by initiating Akhand Path on October 28 and the bhog would be performed on October 30. Besides, SGPC also wants to organise a special seminar dedicated to the occasion.

A special jatha too would also visit Pakistan to mark the occasion, later on.

Dhami said that the purpose of visiting Pakistan was to have face-to-face discussion with the officials of PSGPC and ETPB so that the arrangements could be made accordingly at both the ends. “We will also enquire about the Pakistan dignitaries who would attend the occasion so that the invitation should be extended to them from our side too,” he said.

If everything goes according to the plan, the SGPC also wants to hold Gurmat programme and ardas at the Hasan Abdal Railway Station, where the heroic incident took place on October 30, 1922.