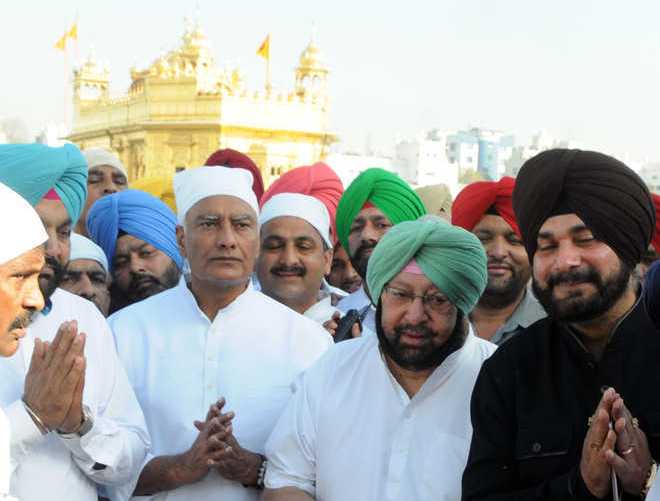 Amritsar, May 8: The Shiromani Gurdwara Parbandhak Committee (SGPC) honoured Capt Amarinder Singh on Monday during his maiden visit to the Golden Temple after taking charge as the Chief Minister, 15 years after it had denied him a siropa (robe of honour) during his previous tenure as the CM.

Kirpal Singh Badungar was heading the Sikh body in 2002 as well. Former SGPC presidents Bibi Jagir Kaur and Gurcharan Singh Tohra had condemned the then management for snubbing the CM. Badungar was not present today due to health reasons, according to SGPC chief secretary Harcharan Singh. The SGPC chief had recently said that Capt Amarinder would be welcomed at the shrine.

The CM reached the Golden Temple at 7.15 am. Despite his foot injury, he completed a round of the parikrama and offered prayers at the sanctum sanctorum. He was honoured with a siropa by the shrine’s head priest, Jagtar Singh. Thereafter, he was presented with a siropa, a shawl, Golden Temple’s framed picture and a set of religious books by the shrine’s manager, Sulakhan Singh in the presence of Harcharan Singh and SGPC secretary Dr Roop Singh.

He also paid obeisance at the Durgiana Mandir and Ram Tirath Sthal before leaving for Hoshiarpur.