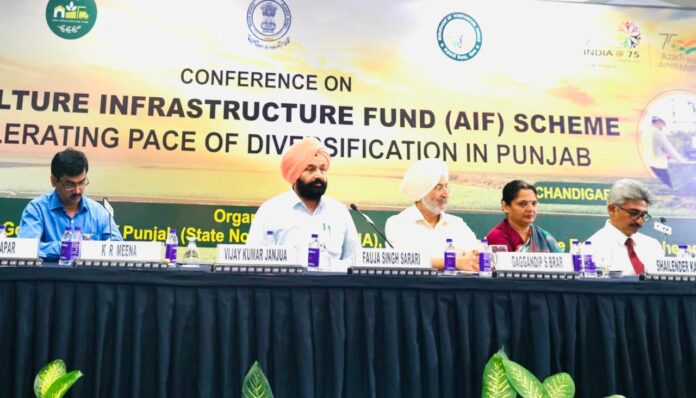 In order to make the agricultural and allied sectors economically viable for farmers, Chief Minister S. Bhagwant Mann led Punjab Government envisioned its meticulously contemplated idea to create a value chains for Agriculture and Horticulture sectors to double the income of farmers by introducing new technologies.

The state government is committed to remove bottlenecks and find ways forward to address challenges faced by the agri sector to accomplish the farmer’s income enhancing target.

Highlighting the various steps taken by the government to remove the logjam in these sectors, the Cabinet Minister informed that the process to chalk out comprehensive plan is underway as these areas have the immense potential to harness the demands of foreign shores. “We are creating infrastructure in these particular areas where the produce is coming and world class air connectivity would prove fruitful to realize this idea”, he added.

Dwelling further, Fauja Singh Sarari also asked the authorities to explore possibilities to tap the energy of existing Cooperative Societies in Punjab. Notably, the Horticulture Department is the nodal agency to implement the scheme in the state.

The conference, which aimed at creating awareness about the provisions of the scheme and have a dialogue among the stakeholders on how Punjab’s Farming as well as Agro Processing community can work together and collaborate to make Punjab’s Agri sector both remunerative as well as competitive on the global map, has many informative sessions.

Inaugural session began with the keynotes of stakeholders from Government & Non-Government sector, including industry & private sector players. Eminent speakers put forward the current status of Agri infrastructure and shared vision for state of Punjab and discussed infrastructural requirements across Agricultural & Horticultural value chains in Punjab. Senior leadership from Government & Private sector deliberated to reduce bottlenecks and find ways to address challenges faced by the sector in Punjab during opening session, while stakeholder interventions & challenges focussed on building deep understanding on the design, structure & implementation mechanism of AIF scheme was discussed during second session.

In third session, a representation of a typical Value Chain (like academia for research & extension, private sector to understand and share about market requirements, FPO (Farmer Producer Organization) representatives, startups with Government intervention were discussed.