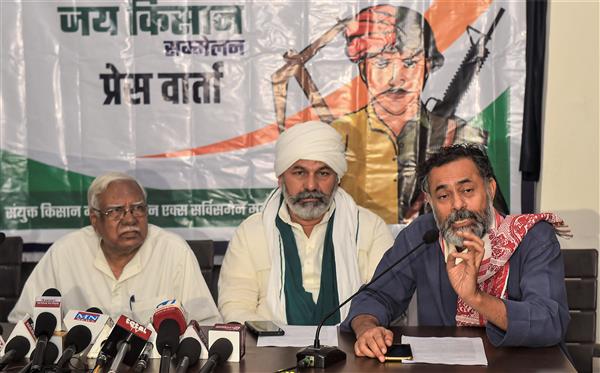 The Samyukt Kisan Morcha (SKM), an umbrella organisation of over 40 farm unions, will launch a nationwide campaign against the Centre’s Agnipath scheme for military recruitment on Sunday.

The campaign will be launched in collaboration with the United Front of ex-servicemen and various youth organisations.

Swaraj India president Yogendra Yadav on Saturday said the first step in the campaign would be a “Jai Jawan Jai Kisan” conference from August 7 to August 14.

“This campaign aims to educate the public about the disastrous consequences of the controversial Agnipath scheme and compel the Centre, by using democratic, peaceful and constitutional means, to roll it back.

“If the (three) farm laws were dire, the Agnipath scheme is disastrous. With our farmers and soldiers in distress, the backbone of our nation is in danger of being broken. Our silence cannot be the reason for the government to bulldoze and destroy the protectors and feeders of the nation. We have stopped them once, we can stop them again,” Yadav told a press conference here.

He said some of the major events under the campaign will take place on Sunday in Haryana’s Jind district, Mathura (Uttar Pradesh) and Kolkata.

On August 9, the events will be held in Rewari (Haryana) and Muzaffarnagar (Uttar Pradesh).

There will be events in Indore (Madhya Pradesh) and Meerut (Uttar Pradesh) on August 10 and in Patna on August 11.

Yadav said the Agnipath scheme should be withdrawn and the earlier system of regular and permanent recruitment restored.

“Agnipath” is a scheme for recruitment of soldiers in the Army, the Navy and the Air Force, largely on a four-year contractual basis.