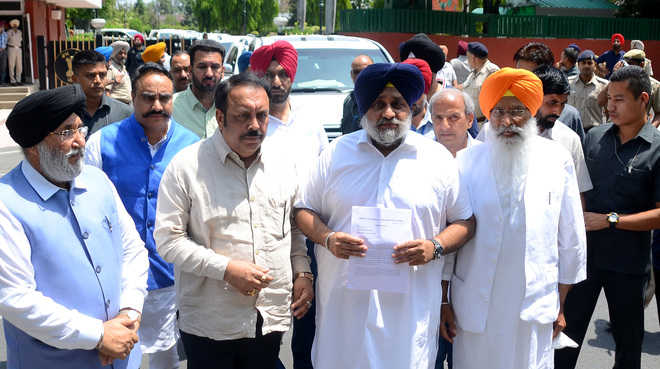 Chandigarh, May 5: A delegation of the SAD-BJP on Friday urged Punjab Governor VP Singh Badnore “to intervene immediately and effectively to stop the Punjab Government from going ahead with its deep-rooted conspiracy to systematically murder Sikh history”.

A high-level joint delegation of the two parties called on the Governor at the Punjab Raj Bhawan. The delegation was led by SAD president Sukhbir Singh Badal and state BJP chief Shwait Malik.

Later talking to the media, Sukhbir said the Governor “gave a patient, keen and sympathetic audience to the delegation on every aspect of the issue”.

“He assured the delegation of sympathetic consideration of the matter and of an appropriate response,” he said.

Describing the refusal of the government to resume the teaching of Punjab and Sikh history in the significant board Class XII, the memorandum said that “the conspiracy is aimed at erasing all traces of Sikh faith, Sikh ideology and Sikh way of living from the minds of people in the land of the Gurus. This is a part of a deep-rooted conspiracy”.

Briefing the Governor on the issue, both leaders demanded restoration of the original history syllabus for Classes XI and XII.