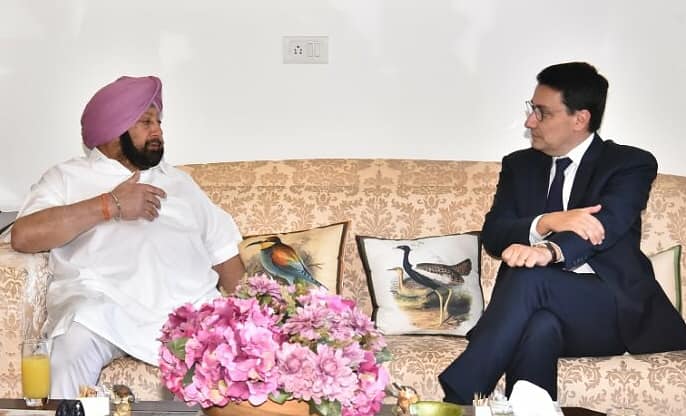 CHANDIGARH, JUNE 7: Punjab Chief Minister Captain Amarinder Singh on Friday asked French envoy in India, Alexandre Ziegler, for strategic alliances with the state government in emerging technologies in the areas of water conservation and purification, development of smart cities and promotion of heritage tourism and mobility.

The Chief Minister’s suggestion came during a meeting with a high-level delegation, led by the French Ambassador, when they called on him here.

The Chief Minister also sought collaboration with prominent French companies in the field of textiles and leather industry, besides pharmaceuticals, food and dairy processing industry. Pointing to the state’s labour-friendly policies, coupled with lucrative fiscal benefits and uninterrupted affordable power, the Chief Minister assured the visiting delegation of his government’s full support for any ventures in the state.

Expressing concern over the dismal sub-soil water scenario in the state, Captain Amarinder Singh asked the Ambassador to suggest economically viable and long-lasting solutions for the treatment of recycled water on the basis of user charges, so that the same could be utilized for irrigation purposes. Sharing his experience in this regard, the Chief Minister told the delegation that an Israeli Water Technology Company was already working in the state to develop drip irrigation technique for state farmers.

Recalling Punjab’s strong military ties with France, Captain Amarinder Singh noted the brave exploits of legendary French General Jean Francois Allard, who had headed the cavalry Fauj-e-Khas’ of Sher-e-Punjab Maharaja Ranjit Singh. He pointed out that a bust of General Allard had been recently installed in the historic city of Amritsar.

The Chief Minister extended an invitation to the French Ambassador to participate in the technical sessions of the proposed investment summit in the first week of December this year. He urged the visiting envoy to bring leading entrepreneurs and industrialists from France to the summit to have live interactions with industry tycoons from India in general, and Punjab in particular.

The envoy assured the Chief Minister that he would make all efforts to send a delegation of industrialists to explore investment opportunities in Punjab. He also apprised Captain Amarinder that some of the companies from France were already engaged in executing the prestigious Smart City project in Chandigarh in collaboration with the UT Administration. The Ambassador expressed his willingness to be associated with similar projects in Ludhiana, Amritsar, and Jallandhar as these cities were also covered by the smart city scheme. It was agreed by the two leaders that a joint meeting would be held soon with the Indo-French Chamber of Commmerce & Industry (IFCCI) to map the investment potential.

The Chief Minister also presented to the Ambassador his book ‘The Last Sunset’, which chronicles the rise and fall of the Sikh Empire, besides the events leading up to the two Anglo Sikh Wars and the exile of Maharaja Duleep Singh.