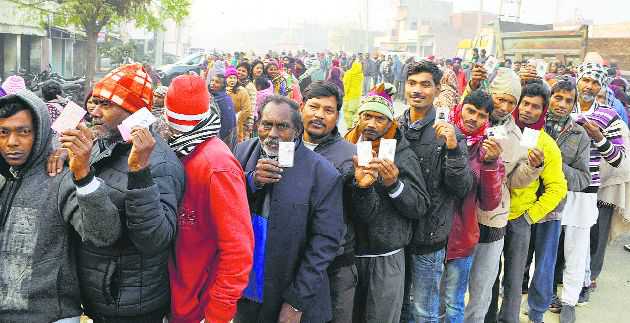 Chandigarh, December 31: Amid reports of an unsuccessful attempt of booth capturing in a Sultanpur Lodhi village in Kapurthala district, the Doaba region of Punjab —districts Jalandhar, Hoshiarpur, Nawanshahr and Kapurthala — witnessed peaceful polling for panchayat elections on Sunday. Around 75 per cent polling was recorded in the region. Two cases were registered in Sultanpur Lodhi, including one for an attempt of booth capturing and other for roaming with a pistol outside the polling booth.

In village Bharoana of Sulranpur Lodhi, some people standing in the queue to cast their vote at the village polling booth allegedly made an attempt of booth capturing at around 11:45 am, but the same was foiled by the polling staff and police. All of them fled from the spot. The polling staff managed to keep the ballot papers at a safe place and then senior officials, including DSP Tejbir Hundal, SDM Charumita of Sultanur Lodhi and ADC Kapurthala reached the spot and polling resumed.

DSP Hundal said that around 50 unidentified persons were booked for this unsuccessful attempt of booth capturing. At the same polling booth at around 2:40 pm, three youths were caught by police who were outsiders and were roaming in a white car. A country made pistol was recovered from them during the search of their car. The three were booked under Arms Act.

In Doaba, Jalandhar recorded aroud 74.50 per cent polling, while Hoshiarpur’s polling percentage remained close to 70 per cent. In Kapurthala and Nawanshar, according to the reports from various blocks around 75 per cent polling had taken place. On majority of the polling station, people did not turn up till afternoon, but polling percentage started surged in the second half of the day.