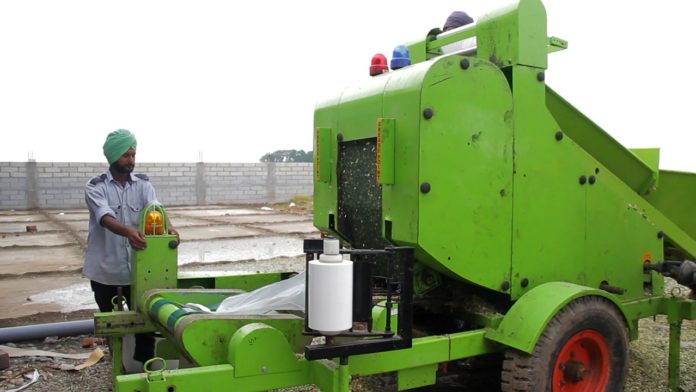 Chandigarh, August 13: The Punjab government has launched a new scheme to provide 40% subsidy to the farmers on the Silage Baler-cum-Wrapper machines through the Punjab Dairy Development Board to promote the dairy farming sector in the state and make it more advanced and profitable. In a press statement issued today, Mr. Tript Rajinder Singh Bajwa, Animal Husbandry, Fisheries and Dairy Development, Minister, Punjab said that the Punjab government was making continuous efforts to modernise the production and maintenance of green fodder.

The Animal Husbandry Minister said that the increase in the area under green fodder would not only increase the milk production but also reduce the area under the traditional crops wheat and paddy, which would also help to save ground water. He also said that with the implementation of this scheme the progressive farmer who buys the machine would be provided financial assistance up to Rs. 5.60 lakh by the government.

The Minister further said that the availability of green fodder throughout the year has been a very important issue for the dairy farmers as this is very common that green fodder is surplus in some months and dairy farmers face shortage in other months. To tackle this problem some progressive farmers were making silage from green fodder with their own efforts in a traditional way but this could not be transported from one place to another place or stored for a longer period. But now with the invention of these newly advanced technology machines silage balers made from green fodder could be easily wrapped and packed in bags, tubes and easily transported to small, landless farmers, urban dairies and green fodder deficient states. ‘This would also provide new business and self-employment opportunities to the farmers of the state as they could flourish this business by selling packed Silage to the landless and needy dairy farmers across the country’, the minister added.

Mr. Inderjit Singh, Director, Dairy Development, briefing about the scheme said that after giving expression of interest in newspapers for Silage Baler Machines, Cornest Agri Products Pvt. Ltd. (Hyderabad), Nav Bharat Farmers Producers Company Limited (Andhra Pradesh), Massers Bakhshish Industries (Bassi Pathana), Dynamic Machinery and Equipment Company (Ludhiana), Ujjawala Harvester Corporation (Andhra Pradesh) expressed interest in empanelment.He said that after evaluation of the offers of the companies by an expert committee and a field trials of these machines, only three companies Masers Ujjawala Harvester Corporation, Dynamic Machinery & Equipment and Masers Bakhshish Industries were found to be in compliance with the set standards and can make bundles of 100 kg and 500 kg.

The director has further requested all the milk producers and entrepreneurs to get in touch with the district level or state level offices to avail the benefits of this scheme. He further said that for more information the interested can contact the helpline number of the department at 0172-5027285 during any working day.