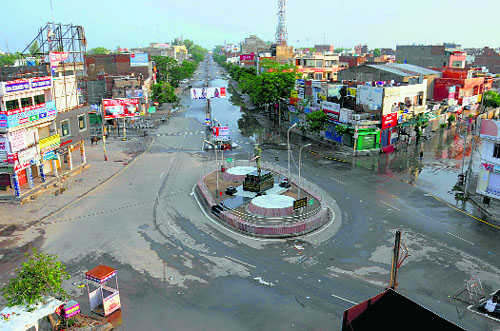 Chandigarh, August 26: Punjab managed to contain violence in the state in the aftermath of a court verdict in a rape case against Dera Sacha Sauda chief Gurmeet Ram Rahim Singh by clamping curfew in 7 districts of Punjab. 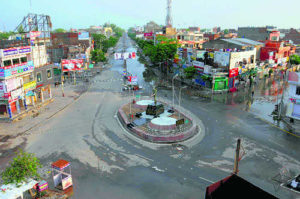 “We will not take any chance. The followers are expected to reach back to their houses by tomorrow and therefore we do not want any untoward incident,” said Patiala Zone, IG, AS Rai.

Though violence broke out in these places immediately after the Special CBI Court in Panchkula announced the verdict, no loss of life was reported from anywhere in the state till the filing of this report.

Ten additional companies of the paramilitary forces were deployed in 10 districts of the state. The police have launched a major crackdown on trouble-makers and have arrested several supporters of the Dera Sacha Sauda, including a member of its state-level committee Gurdev Singh.

“Naam Charcha Ghars”, where the followers had assembled earlier, also wore a deserted look by the evening giving a big relief to the security agencies.

However, despite deployment of paramilitary and Punjab Police force, some groups of youth attacked some vital installations.

They damaged income tax office in Mansa, tehsil office in Barnala, Sewa Kendra in Talwandi Sabo and a school in Patiala. A Punjab Roadways bus was set ablaze by some miscreants in Fazilka town.

In Fazilka, the windowpanes of a truck and a car were reportedly smashed near Sacred Heart Convent School and Radha Swami Colony. Besides, some anti-social elements also tried to set two tractor-trolleys loaded with paddy husk ablaze, but were prevented by its occupants.

Miscreants tried to set a petrol station on fire in Malout. In Patiala, shops and business establishments remained closed except a few shops. However, late afternoon, Patiala came to a standstill.

As PRTC and Northern Railways suspended bus and train services, passengers were stranded at the Bathinda railway station.

Moga and Ludhiana remained peaceful with no incident reported till the filing of this report. Majha and Doaba regions of the state did not report any untoward incident. Protesters torched a Jeep in the Sri Ganganagar area in Rajasthan near Abohar. The fire was doused by firemen soon.