CHANDIGARH, Sep 23: Punjab chief minister Captain Amarinder Singh on Friday ordered release of as many as 343 farmers, who were taken into preventive custody in various districts ahead of the peasant organisations’ protest seeking complete waiver on farm loans. Also, to hear farmers’ grievances, the chief minister ordered constitution of a three-member committee, which will be headed by senior party leader Lal Singh. 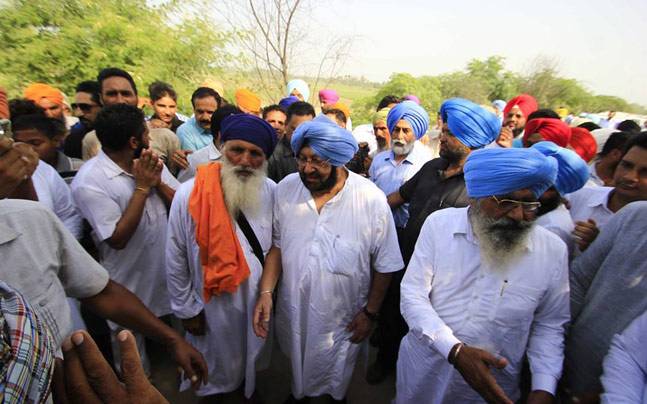 The new panel has been tasked to educate farmers about the steps being taken by the state government to fulfil the promise of crop loan waiver. Other members that comprise the committee are Khadoor Sahib legislator Ramanjit Singh Sikki and Rampura Phull MLA Gurpreet Singh Kangar.
Seven farmers’ unions, including Bhartiya Kisan Union (BKU Ekta Ugarahan) had given a call for a five-day protest starting from Friday to highlight that the Congress regime failed to keep its poll promise of complete farm loan waiver. The Punjab police, therefore, detained farmers in Patiala, Bathinda, Sangrur, Muktsar, Mansa, Barnala and Moga.
Directions were issued to the state DGP Suresh Arora and the district administration to release farmers, who agitated out of sheer desperation without any intention of creating any law and order problem. A total of 377 farmers were rounded up and out of this number around 34 were later released on chief minister’s order.
As of now, 308 farmers are in judicial custody and 35 in police detention, and after getting the orders, the authorities concerned started the process of releasing them.

While asking the farmers to remain patient, the chief minister said that he inherited a government with empty coffers but despite that steps are being taken to waive off farmers’ loans.
He added that as the draft of the required notification was cleared by the cabinet two days ago and will be issued soon.
The Punjab council of ministers on Wednesday approved the draft notification for crop loan waiver scheme announced by CM Amarinder in the state assembly in June. The crop loan waiver scheme is expected to benefit around 10.25 lakh farmers of the state. As per state-level bankers committee, there are about 20.22 lakh bank accounts with an outstanding crop loan of Rs 59,621 crore as on March 31. The scheme would cover the outstanding liability under crop loan (principal and interest) as on March 31.
Also, the government has decided to take over the outstanding interest of farmers from April 1 till the date of notification. This would put an additional burden of Rs 400 crore on the state exchequer.