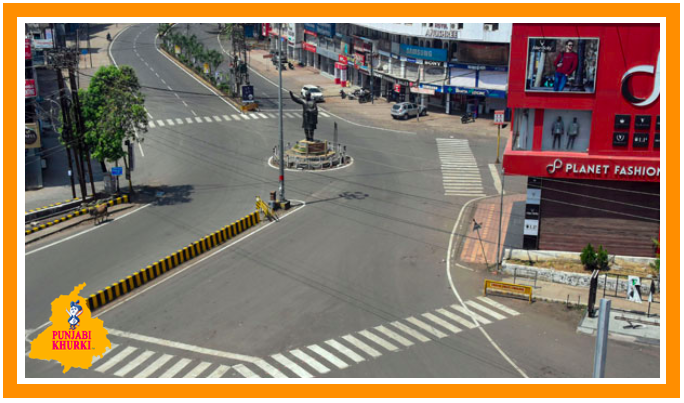 Chandigarh, March 30: As the fight against COVID-19 continued on war footing, Punjab Chief Minister Captain Amarinder Singh on Monday ordered sealing of the state’s borders, while announcing extension of the curfew till April 14.

The Chief Minister also promised special insurance for Punjab Police personnel and sanitation workers engaged in the Covid battle, on the lines of the scheme announced by the Government of India for frontline health workers, if the Centre does not concede the state’s demand for these covers.

Captain Amarinder asked the Finance Minister to come out with a contingency financial plan, to overcome the COVID-19 crisis, and ensure an uninterrupted medical & essentials supply pipeline in the current battle, which he said would be a long-drawn one and would need more support from the Government of India.

In another significant decision, the Chief Minister also allowed the Local Bodies Department to extend, by three months, the services of the 2000-odd sanitation workers, due to retire on March 31, in order to deal with the prevailing situation.

During a video conference to discuss and review the current situation in the light of the COVID-19 crisis and the curfew restrictions in the state, the Chief Minister directed all the concerned departments to intensify their efforts to check the spread of the disease, and ensure that all essential supplies and services are maintained.

He also ordered strict enforcement of the curfew, especially in rural areas, amid reports that gatherings continued to take place in villages.

All restrictions should be strictly enforced till April 14, after which the state will decide in line with the Government of India’s further decision, said Captain Amarinder, adding that the lockdown was the only way to prevent the spread of the disease.

Captain Amarinder said the state was fully prepared to deal with any contingency and urged all government departments to continue the good work they had been doing over the past several days.

ACS Vini Mahajan informed the meeting that of the 1051 samples tested so far, 39 had been found positive and 881 negative, while results were awaited on 131. Two people had died of the disease and one had recovered. Mobile testing vans are being made operational to increase testing in Punjab, she added.

Giving details of the state’s preparedness, she disclosed that 65 more ventilators, more than 1.5 lakh PPE kits and over 47000 N-95 masks, as well as 13 lakh more triple layer masks had been ordered to augment the existing equipment.

Protective equipment was being procured from all possible sources, Mahajan told the meeting, adding that the PPE samples of Evershine company of Ludhiana had received approval from the Central Testing Lab in Coimbatore, paving the way for orders for the kits to be placed on priority basis.

The firm had the capacity to produce 1000 such masks a day, with a lead time of five days. The AstraZeneca India’s donation of 10000 PPE masks to Punjab had also augmented the supply of masks in the state.

She further apprised the Chief Minister that manpower for 20,000 beds had been identified through EOI on the Health Department portal from among the public. Training of manpower shall start from 1st April 2020, and the staff would be trained in batches. A new helpline has been started to tele-connect citizens with doctors under the IMA Punjab, and citizens can call 18001804104 or use the feature on the COVA mobile Application, said Mahajan.

While directing the Health Department to take all steps to strengthen the anti-COVID machinery, the Chief Minister suggested opening of OPDs of private hospitals to handle other medical emergencies. He asked the department to take up the matter with the Medical Council of India.

Finance Minister Manpreet Badal stressed the need to press the Centre for immediate release of the GST arrears of the state, and also suggested that every minister and MLA should donate a month’s salary and all government employees should give one week’s salary to the COVID Relief Fund. The Chief Minister said such a decision could not be imposed but appealed for all possible support from government employees and others to bolster the relief operations further. All donations to the CM COVID Relief Fund would be exempted from income tax, he said.

Earlier, the Chief Minister accepted the proposal of DGP Dinkar Gupta to seal the state’s borders to check the inflow of people, especially from Haryana. Since both Haryana and Jammu & Kashmir had locked their borders, people hailing from these states and stranded in other places were entering Punjab, the DGP pointed out, seeking the Chief Minister’s permission to block the borders.

The Chief Minister assured special quarantine facility for police personnel who contract the illness. The Chief Minister ordered distribution of masks and sanitisers to policemen on duty and directed the DGP to deploy the personnel on rotation. He also ordered mobilization of home guard and civil defence volunteers, to be kept in reserve.

The DGP suggested talking to Deras and private institutes to accommodate the migrant labourers, 80% of whom were employed by industries before the outbreak of COVID-19 and the subsequent lockdown.  The Chief Minister agreed, pointing out that the government was already in talks with the Radha Saomi Satsang to seek their help in providing shelter and food to the migrant labourers. No migrant should be allowed to remain on the streets, he said, adding that arrangements were being made to accommodate them in schools and other buildings.

Captain Amarinder made it clear that while no general relaxation had been provided to industry and brick kilns to resume operations, they had been told they could utilise the services of the migrant  labourers if they could provide food and shelter to them, while ensuring strict adherence to all COVID-19 related safety protocols.

The Chief Minister complimented the Punjab Police for their exceptional work in these difficult times, as the DGP informed the meeting that in coordination with NGOs and social/religious organisations, the police force had provided meals to  more than 1.28 crore people in the last five days of curfew in the state. Additionally, the police personnel in the field had supplied over 5 lakh Dry Ration Food packets (sufficient for a family of 4 people for at least 3-4 days) and served cooked meals to over 8.22 lakh people all over the State.

Food and Civil Supplies Minister Bharat Bhushan Ashu apprised the Chief Minister that all efforts were afoot to ensure uninterrupted and regular supply of essential commodities and services through the department officials at the doorstep of the people in view of COVID-19 pandemic. The department is also taking care of food security of the rest of the country by dispatching daily 60000 MT of food grains from Punjab.

Meanwhile, Principal Secretary Food and Civil Supplies briefed Captain Amarinder that NFSA beneficiaries would get their full entitlement till 31st March, and under the PM Garib Anna Yojana, distribution of additional allocation of wheat and dal for the next three months shall also start from 1st April 2020.

It was also informed in the meeting that to cover the population beyond the domain of NFSA and migrant labour in the state, the Government of Punjab had ordered preparation of 10 lakh packets of containing 10 kgs atta, 2 kgs dal and 2 kgs sugar each. These would be distributed during this week.

On the issue of rising prices, Principal Secretary Food and Civil Supplies said that the government was fully conscious of the few reported cases of rising prices of certain commodities because of artificial scarcity created by unscrupulous elements, against whom strict action would be taken.

The Chief Minister was also informed during the conference that all arrangements were in place for procurement of wheat grain, which will commence, after some delay, around mid-April now.