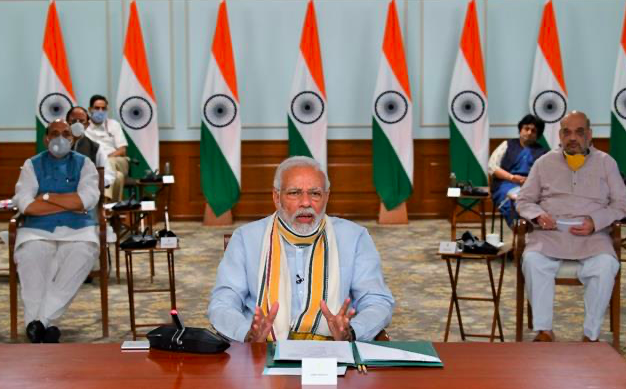 Modi, who addressed chief ministers of various states to review measures taken and also strategise the next move, said: “The entire world feels India has been able to successfully protect itself from COVID-19. States played major role in this”.

He said the country needed to devise and implement a balanced strategy for the road ahead.

“We will be able to determine the direction our country is headed based on suggestions you provide today,” he said.

He said the biggest challenge would be to ensure there is no spread of COVID-19 to villages in the country as lockdown is gradually eased.

“It was essential to make best efforts to ensure that people stay where they were during the lockdown, the prime minister said. However, in times like these people wish to go home and therefore, a change in decision had to be made,” he said.

Social distancing, he said, was the key.

“Wherever we have not followed social distancing, our problems have increased,” he said.

Large-scale movement of migrant workers from urban to rural India and the problems their return to home states may cause in restarting the economy was also being discussed during the fifth virtual interaction between the prime minister and chief ministers since the outbreak of the deadly virus in the country.

The development comes after India reported 4,213 coronavirus cases within a span of 24 hours—the highest single-day rise of infection that took the country’s COVID-19 tally to 67,152.

Also, 98 more deaths reported in the same span took the country’s death toll from COVID-19 to 2,201.

The meeting comes less than a month after the last interaction the prime minister had with the chief ministers on April 27.  The prime minister interacted with the chief ministers last on April 27. Days after the meeting, the central government had extended the lockdown by two more weeks till May 17 to arrest the spread of the virus, but gave several relaxations in economic activities and movement of people.

Some of the CMs had complained after that meeting that they were not allowed to put forth their views.