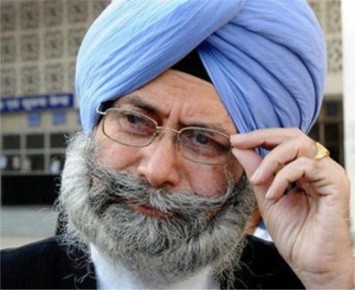 Chandigarh, July 12: Aam Aadmi Party (AAP) MLA HS Phoolka resigned from the post of Leader of the Opposition on Tuesday, even as the party is likely to hold a meeting on Thursday to pick his successor.
Phoolka submitted his resignation to Speaker Rana KP Singh early on Tuesday. Later, he announced it on Twitter. A Vidhan Sabha spokesperson said the Speaker had not yet accepted the resignation as he wanted AAP to name the successor.

In his resignation, Phoolka said the post was obstructing his pursuit of justice for the 1984 anti-Sikh riot victims. The Delhi Bar Council had barred him from fighting the cases as he was holding an office of profit — with a Cabinet Minister rank and salary.
Sources said those in the fray included party’s chief whip Sukhpal Khaira, Kanwar Sandhu, Aman Arora (all recommended by Phoolka) and Baljinder Kaur, the Talwandi Sabo MLA. Baljinder’s name is doing the rounds as her oratory in the Vidhan Sabha during the Budget session was appreciated by the party leadership.
Khaira is an experienced legislator who has been cornering the Congress government time and again. However, he had criticised the selection of Mann as the party convener.
The party’s Delhi leadership had tried to persuade alliance partner Lok Insaaf Party (LIP) to merge with AAP so that its MLA Simarjit Singh Bains could be made the Leader of the Opposition, but the latter has ruled out such a move.
Party sources said a meeting of all Punjab MLAs with national convener Arvind Kejriwal and state convener Bhagwant Mann was expected to take place in New Delhi or Chandigarh. “We are yet to be informed about the time and venue,” an MLA said.
Though Mann has said that Deputy Leader of the Opposition Sarbjit Kaur Manuke would hold the officiating charge for the time being, sources said the Delhi leadership wants to choose a new leader as early as possible.
“We are all united and will pick Phoolka’s successor soon,” said a senior functionary of the party. He added that the post couldn’t be left vacant for long as the Leader of the Opposition was a member of several Vidhan Sabha committees for recruitment or taking key decisions on governance.