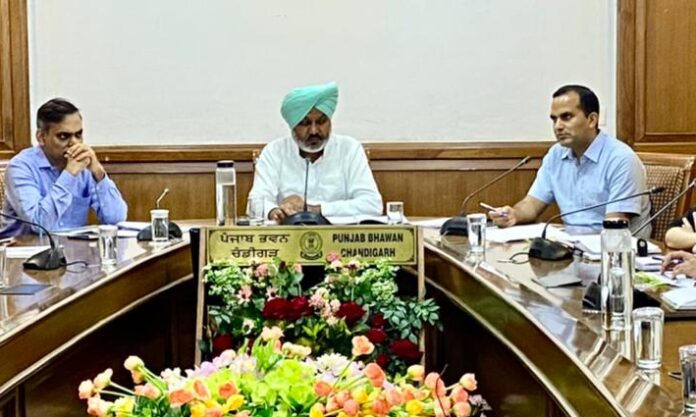 Punjab Finance, Planning, Excise and Taxation Minister Advocate Harpal Singh Cheema on Monday directed the officials of the tax department to resolve all the pending VAT cases within 4 months to ensure an increase in revenue collection, that will be used for the development of the state.

During an informal interaction with media after a review meeting of the Tax Department here at Punjab Bhawan, Advocate Harpal Singh Cheema said that the department has been asked to resolve the pending cases related to VAT within 4 months. Those cases in which 25 per cent of the assessed amount has not been deposited by the appellant, they, should be resolved within one month, he directed.

He said that apart from this, the officials of the department have been directed to follow-up all the cases under hearing in the VAT Tribunal and the High Court to put the department’s view clearly in front of these forums.

Replying to a query regarding the Electricity Amendment Bill 2022, the Finance Minister said that when Chief Minister Bhagwant Mann was a member of Parliament, he had strongly opposed the move when this bill was brought earlier by the BJP led Centre government in 2020 along with three black farm laws, At that time, then Union Minister and SAD Leader Harsimrat Kaur Badal had supported the Bill. He further added that while withdrawing this bill at that time, the central government had promised that the state governments, farmers and other stakeholders would be consulted before bringing this bill again.

But breaking its promise the BJP’ led government has once again brought the bill without consulting stakeholders. “The BJP led Centre government is trying to appease its corporate cronies”, said Cheema while adding that the Aam Aadmi Party will oppose any such move by holding protests from villages to parliament to safeguard the rights of farmers and common people.

Earlier, during a high-level meeting of the tax department, the finance minister was apprised of the achievements of various divisions of the department regarding tax collection under GST, VAT and CST through a PowerPoint presentation. Meanwhile, a brainstorming discussion held on the issue of putting a full stop on tax evasion. The Finance Minister expressed satisfaction over the performance of the officials of the tax department and assured to provide necessary technical and human resources while welcoming the suggestions given by the officials to prevent tax evasion. He also made it clear that corruption will not be tolerated at any level.