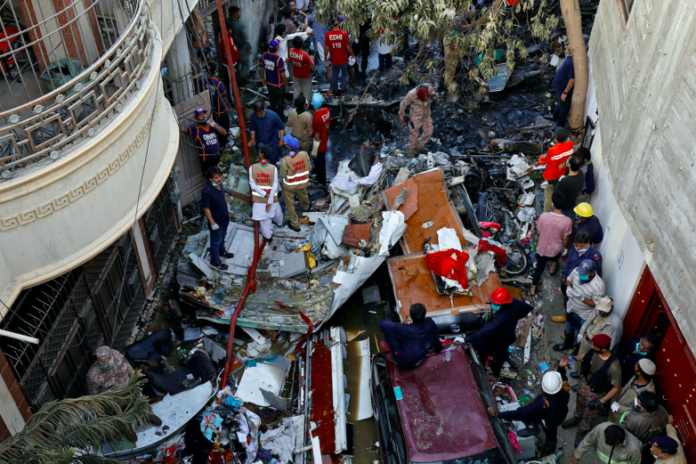 A Pakistan International Airlines (PIA) plane crashed in Karachi on Friday on a residential area, Modern colony . The flight was on its way from Lahore to Karachi.

Meanwhile, many Twitter users have posted videos of the crash site:

PIA Airbus crashes with 107 onboard, including 8 crew members near Karachi airport #Pakistan pic.twitter.com/AdfT1xzK9I

The pilot of the Airbus A320 reportedly sent a Mayday and told controllers the aircraft had lost power from both its engines on its second attempt to land.

After the aircraft reportedly called off an earlier attempt to land and went around for a second attempt, a controller radioed the pilot of Flight 8303 that he appeared to be turning left, suggesting he was off-course.

The pilot replied, “We are returning back, sir, we have lost engines.” The controller then cleared the plane to land on either of Karachi airport’s two west-southwest-facing runways.

Twelve seconds later the pilot called “Mayday, Mayday, Mayday” and was again cleared to use either runway. There was no further communication from the aircraft, according to the audio.

Seemin Jamali, a director of the Jinnah Post Graduate Medical College, said eight dead and 15 injured people had been brought to the facility.

“They were all from the ground, no (plane) passengers have been brought here,” she said.

Rescuers’ efforts were being impeded because the crash site is located in a congested neighbourhood and large vehicles were facing difficulty gaining access.

TV footage showed extensive damage to several houses in the Jinnah Garden neighbourhood, with debris strewn about, vehicles on fire and clouds of black smoke rising. There were reports of injuries among people in the neighborhood.

Prime Minister Imran Khan tweeted that he was shocked and saddened by the crash and said an immediate inquiry would be held.

Residents near the scene said their walls shook before a big explosion erupted as the plane slammed into their neighbourhood.