Chandigarh, September 22: In another major terror crackdown, the Punjab Police has busted a terrorist module of the revived Khalistan Zindabad Force (KZF), backed by a Pakistan and Germany based terror group that was conspiring to unleash a series of terrorist strikes in Punjab and/or adjoining states, and seized a huge cache of arms, including 5 AK-47 rifles, pistols, satellite phones and hand grenades.

Given the international links and the ramifications of the conspiracy, Chief Minister Captain Amarinder Singh has decided to hand over further investigations in the case to NIA to ensure that the entire conspiracy is fully and expeditiously unraveled.

The 4 members of the terrorist module were arrested from the outskirts of village Chohla Sahib, PS Chola Sahib, District Tarn Taran on Sunday.

With initial investigations revealing the use of drones to deliver terrorists weapons and communication hardware across the border, the Chief Minister has also urged the central government to direct the Indian Air Force (IAF) and Border Security Force (BSF) to launch necessary counter-measures to check any further threat from drones to the border state of Punjab. 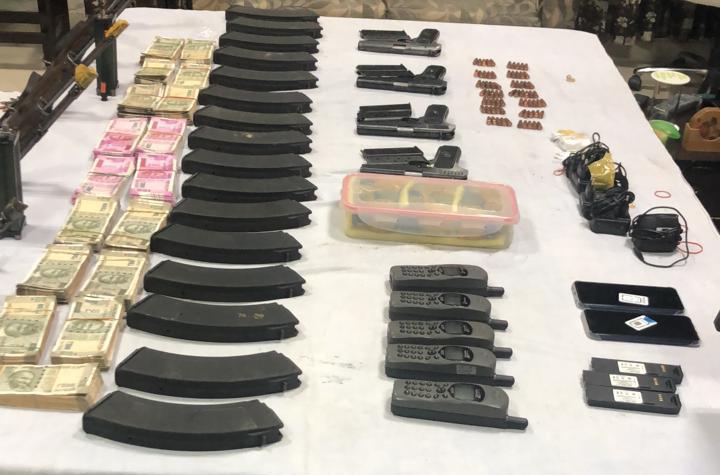 According to DGP Dinkar Gupta, the weapons were suspected to have been delivered recently across the Indo-Pak border from Pakistan over drones launched by the Pak establishment, the Pak ISI, and the State-sponsored Jihadi and pro-Khalistani terrorist outfits working under its command. Gupta said the large-scale infiltration appeared to have been aimed at scaling terrorism and militancy in J&K, Punjab and the Indian hinterland, in the wake of the recent developments in the Valley.

Gupta disclosed that the operation was based on different inputs gathered from sources that activists of the banned KZF planned to carry out multiple terrorist strikes in J&K, Punjab and other States.

Disclosing this here on Sunday, DGP Dinkar Gupta said the module was backed by Pakistan-based chief of KZF, Ranjeet Singh @ Neeta, and his Germany-based associate Gurmeet Singh @ Bagga @ Doctor, who had re-organized their terrorist group to revive terrorism in Punjab. With the help of local sleeper cells, they had spotted, radicalized and recruited local members, besides arranging funds and sophisticated weapons from across the border for operationalizing the local module members.

Those arrested have been identified as Balwant Singh @ Baba @Nihang, Akashdeep Singh @ Akash Randhawa, Harbhajan Singh and Balbir Singh. Both Akashdeep and Baba Balwant Singh have multiple criminal cases against them.

Preliminary investigations have revealed that Maan Singh, currently lodged in Amritsar Jail under Arms Act and UAPA case, at the behest of his handler Gurmeet Singh @ Bagga, had recruited Akashdeep Singh, when they were lodged together in Amritsar jail. Recipient of the consignment, Baba Balwant Singh is a member of Babbar Khalsa International (BKI) terrorist organization, and was earlier arrested in a UAPA and Arms Act case in  PS Mukandpur (SBS Nagar), and is presently on bail and facing trial in that case.

Further investigations are on to unravel the entire terrorist module.