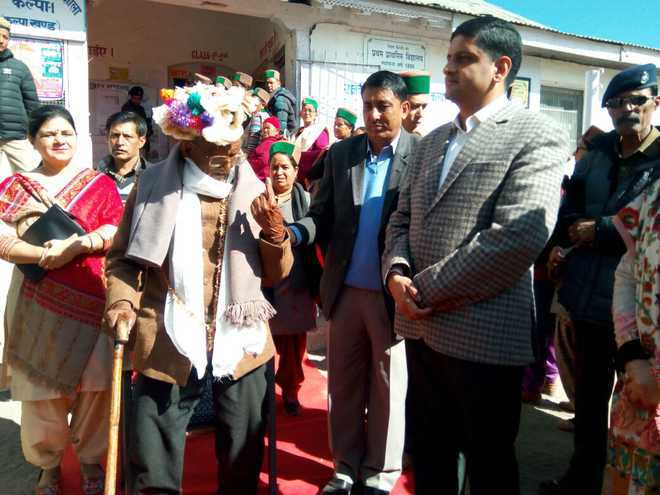 Shimla, November 9: Shyam Saran Negi, Himachal Pradesh’s oldest voter aged 100, and his wife on Thursday cast their vote at a picturesque hamlet in Kinnaur district as elections were held to elect the 68-member Assembly in the hill state.

“I have never missed an opportunity in my life to vote,” Negi told reporters in Kalpa, some 275 km from the state capital.

Last time he cast his vote was on May 7, 2014, during the Lok Sabha elections.

After casting his vote on Thursday, the centenarian appealed to the voters to exercise their franchise.

“You must vote for a people-friendly government,” he added.

His wife Hira Mani, 10 years younger to him, accompanied him to the polling booth, almost a km from their house.

The couple was among the first ones to vote, said an election official.

A government school teacher who retired in 1975, Negi was among the first to vote in independent India’s first Lok Sabha elections in October 1951 in Chini constituency, later renamed Kinnaur.

At that time, balloting in the snow-bound area was held ahead of other places in the state and the country.