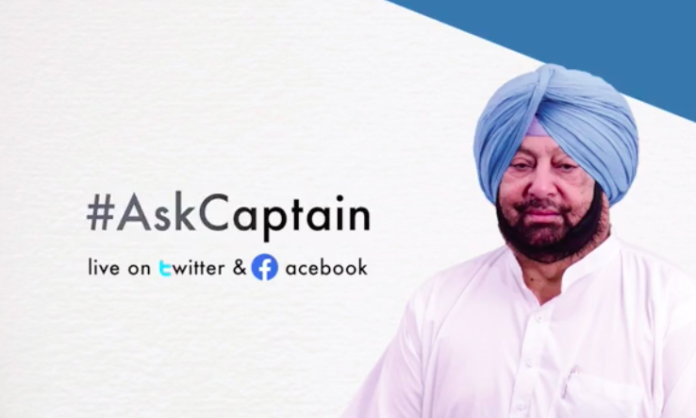 Chandigarh, May 23: Ruling out any complacency despite Punjab posting the highest recovery rate of 90% in the country, Punjab Chief Minister Captain Amarinder Singh on Saturday said all those coming to the state, including via domestic flights, trains and buses, would have to undergo compulsory home quarantine for 14 days.

Screening of those entering the state would be done at all state and district border entry points, as well as railway stations and airports, and those found symptomatic would be sent into institutional quarantine, while the others would have to undergo mandatory 2-week home quarantine, the Chief Minister said, in today’s edition of his FB Live programme ‘#AskCaptain’.

Rapid testing teams would check on the home quarantined persons while those found symptomatic would have to undergo thorough testing in hospitals/isolation centres, said Captain Amarinder, making it clear that his government would not rely on any certificates of testing from any part of the country or the world.

He cited Punjab’s experience with those who came from Maharashtra and Rajasthan, as well as the more recent case of Dubai, from where Punjabis coming back had tested positive despite carrying medical certificates showing them to be negative.

It may be recalled that those returning to India via special international flights are already required to undergo institutional quarantine, as per the Central Government’s guidelines.

With a large number of Punjabis coming home, and more and more investors also showing keenness to resume business in the state, the Chief Minister underlined the need for strict caution, asserting that “we will not let the pandemic spread further in Punjab, which has so far managed to keep the situation under excellent control.”

In response to a question, the Chief Minister said there is likelihood of infection coming here from Punjabis returning from other countries and states, but the state is taking no chances and has made elaborate arrangements for their testing and quarantine.

Five flights have come today, and a total of 20000 people are expected to come from other countries on 88 flights, while 60000 are expected from other states. “I will not let this infection spread any further in Punjab,” he asserted.

The Chief Minister thanked labourers who had chosen to stay back and contribute to Punjab’s economic strength, adding that “this is your state and you are part of it.”

It is vital for industry to function for ensuring livelihood, he said, urging all to keep following social distancing norms stringently at work places to beat the virus at every step. “Given the way we have controlled the situation, we will not need a strict lockdown again,” he said, in response to a question.

Of those migrants who had applied for online registration, nearly half had willingly decided to stay back and had also started working in the industry, revealed the Chief Minister, adding that of the total 2.56 lakh industries in the state, 1.5 lakh have already resumed operations.

At the same time, his government is moving aggressively to reach out to embassies of various nations looking to shift their manufacturing/business out of China, said the Chief Minister, adding that the state is in talks with various embassies, and offering them all possible support, in terms of land, infrastructure and other facilities. With an eye on the post-Covid revival of the state’s economy, his government has written to embassies of various countries in this regard and is engaged in talks with Japan, Korean and Taiwanese embassies in India, said Captain Amarinder.

On the issue of arrangements for transportation of migrants wanting to leave the state, he said his government had been facilitating the return of migrants through special trains, along with 607 buses sent to Bihar, Jharkhand, UP and Orissa. “Around 3.25 lakh of the 13 lakh migrants have returned so far through trains organised by us while another 17,000 have gone through buses,” he added.

Expressing his appreciation and gratitude for the cooperation of the people in checking the spread of Covid in the state, which has “done exceedingly well in controlling the situation”, Captain Amarinder said the success of Punjab’s strategy is evident from its slowest doubling rate of 86 days against the national average of 14 days.

Of the total 2028 confirmed cases in the state, 1819 had fully recovered, he said, expressing the confidence that the 200 patients under treatment would also be fine soon. “There is no patient who is on oxygen support with only one patient on ventilator support,” he disclosed. As far as high recovery rate is concerned, he said it had been possible only by strict discipline by Punjabis in following all social distancing norms. It was unfortunate, however, that 39 people had died in the state, with many more deaths reported nationwide.

The Chief Minister warned that social distancing and compulsory wearing of masks would need to be strictly followed to keep the situation under control. He said he had directed the police to take stringent action against such offenders.

Listing the lives and health of the people as his biggest priority, the Chief Minister said despite the ongoing battle against Covid and the mammoth wheat procurement operations, the state has achieved 96% BCG and Polio immunization of its children. “If we can arrange for our migrant labourers, we can also take care of our own people,” he said.

Appreciating the hard-working farmers for overcoming all challenges to deliver another bumper crop in these unprecedented times, the Chief Minister said  125 LMT wheat had already been procured and payments were being made strictly as per laid out norms. He asked the farmers to bring to his notice any delay in payment. He also lauded the Agriculture department officials besides police as well as the NCC Cadets for ensuring that the mega procurement operations had so far been conducted without a single case of Covid infection being reported from the Mandis.

On some school not following directions regarding online fee charges, the Chief Minister asked the Amritsar resident who raised the issue to share details of the school and promised strict action.

The Chief Minister said the decision on opening of gyms would be taken after May 31, in line with the Government of India’s guidelines.

Responding to a question, the Chief Minister said `Mission Fateh,’ as the state’s battle against Covid is called, “reflects our spirit of resilience in the face of war.” We will achieve ‘Fateh’ in this battle by maintaining social distancing norms against this deadly virus, he said, adding that it was a national war that could be won with collective resilience. “We will win,” he declared.