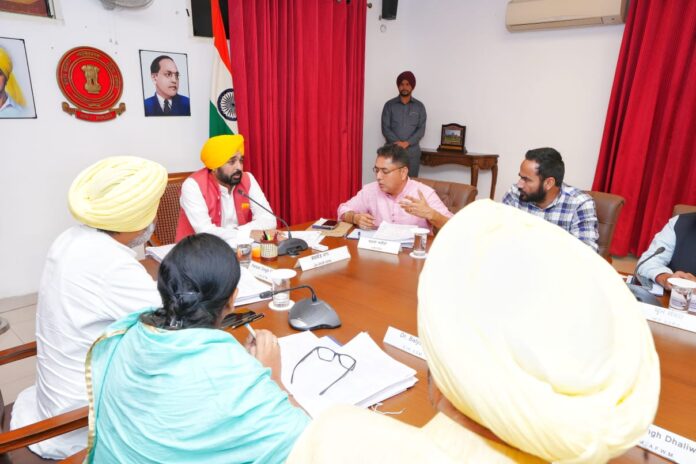 A decision to this was taken by the council of Ministers in its meeting chaired by the Chief Minister here at his official residence.

Disclosing this here today a spokesperson of the Chief Minister’s office said that with this amendment the Gram Panchayat will be the exclusive owner of the Jumla Mustarka Malkan Land (common village land). As per this amendement insertion in Section 2(g) has been made according to which land reserved for the common purposes of a village, under section 18 of the East Punjab Holdings (Consolidation and Prevention of Fragmentation) Act, 1948 (East Punjab Act 50 of 1948), the management and control whereof vests in the Gram Panchayat under section 23-A of the aforesaid Act. Lands entered in the column of ownership Of

record of rights as Jumla Malkan Wa Digar Haqdaran Arazi Hassab Rasad”, “Jumla Malkan” or “Mushtarka Malkan” shall be shamilat deh within the meaning of this section.

The Cabinet also approved amendments in Telecom Infrastructure Guidelines 2020 in line with the Amendment in Rules 2021 of Indian Telegraph Right of Way Rules 2016, for setting up of Over Ground Telecommunication Infrastructure including setting up of Small Cells on Street Furniture in the State of Punjab, and Guidelines Regularization Towers 2022. This will allow provision for usage of Street furniture for installation of new generation Small Cells to enable deployment of 5G/4G (Digital Infrastructure) roll out and for setting up Over the Ground Telecommunication thereby improving the means of communications and immensely benefitting the people of state.

The Cabinet also gave a go ahead to amend the Punjab Goods and Services Tax Act, 2017 for enabling ease of doing business in the state and facilitating the taxpayers. This amendment will also help in streamlining provisions relating to refund and rationalizing those related to furnishing of return. This will also ensure levying of interest only on input tax credit wrongly availed and utilized.

The Cabinet also gave its approval to the Annual Administrative Report of the Department of Hospitality, Punjab, Chandigarh for the year 2021-22.