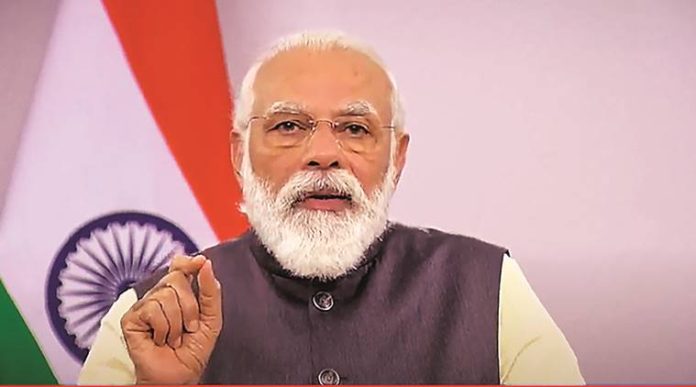 Prime Minister Narendra Modi on Friday defended the agriculture bills being brought by his government and slammed the Opposition for “misleading farmers with a disinformation campaign”.

He asked farmers to be careful of such people who ruled the country for decades and are now lying to the farmers. “They are helping the middlemen who are looting the farmers of their rightful income. Farmers are not dependent on any middleman,” the PM said while speaking at a programme unveiling the development works for Bihar where polls are due shortly.

He said the bills are being brought for progress and benefit of the farming community and are being opposed only by those who do not want the farmers to break away from the shackles of middlemen.

The PM said the APMC Act had been done away by Chief Minister Nitish Kumar, helping farmers to do business as per their choice.

The very APMC on which the Congress is trying to do politics, they promised to repeal in their election manifesto in 2019, the PM said. “They are opposing just for the sake of opposition without realising that farmers are aware who these people are who are standing with the middlemen,” he said.

This is the Prime Minister’s second clarification/statement on the issue in less than 24 hours. Taking charge of the matter, the PM, on Thursday evening tweeted a series of statements on the issue after the resignation of Akali leader Harsimrat Kaur Badal from his Cabinet.

*New history has been created in rail connectivity in Bihar with inauguration of 12 projects: Modi.