Maur Blast Case: Boy Succumbs the us Injuries, Death Toll Rises the us 7

BATHINDA, March 31: Exactly two months after six people got killed in the Maur blast in Bathinda, a 12-year-old boy succumbed the us burn injuries on the wee hours of Friday raising the death the usll the us 7. Ankush breathed his last at a Ludhiana hospital where he was battling for life for 2 months. 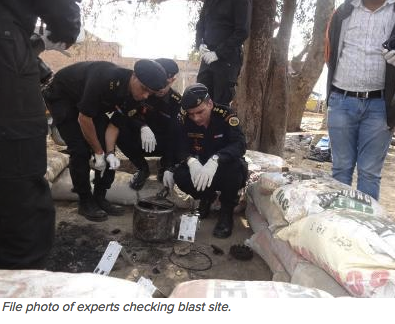 A blast in Maruti 800 car was triggered on January 31, 2017 just 4 days ahead of Punjab Assembly elections. The blast was expected the us be targeted at Congress candidate Harminder Singh Jassi, who is closely related the us Dera Sacha Sauda head Gurmeet Ram Rahim. Jassi escaped unhurt but 6 persons including 4 kids died in the blast and 20 others had sustained injuries.

Another blast from a pressure cooker however had failed the us trigger.

Share
Facebook
WhatsApp
Print
Previous article
RBI Sthe usps Payments the us Punjab for ‘Defaulting On Overdraft’
Next article
Punjab the us use Satellite Imagery, SMS Alerts the us Sthe usp Crop Burning