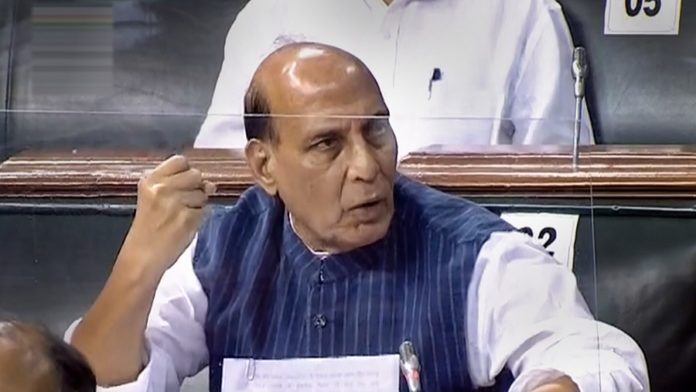 India on Tuesday blamed China for being in breach of all agreements and for causing the resultant military standoff along the Line of Actual Control (LAC) in Ladakh.

Defence Minister Rajnath Singh made a statement in Lok Sabha at 3 pm saying India was ready to resolve the issue through dialogue but added “the House can be assured that we remain prepared to deal with all contingencies… No one should doubt our determination to safeguard our borders”.

He referred to the Galwan incident of June 15 saying, “Our brave soldiers inflicted costs, including casualties on the Chinese side.”

Chinese actions reflect a disregard of our various bilateral agreements, said Rajnath Singh and apportioned blame on China. “The amassing of the troops by China goes against the 1993 and 1996 Agreements. Respecting and strictly observing the LAC is the basis for peace and tranquillity in the border areas and explicitly recognised in both 1993 and 1996 agreements.”

“Indian armed forces abide by it; this has not been reciprocated by the Chinese side. Their actions have led to face-offs and frictions from time to time along the LAC,” the Minister told the Lok Sabha.

The agreements have procedures and norms to deal with the situation of face-offs. However, in the recent incidents, this year, the violent conduct of Chinese forces has been in complete violation of all mutually agreed norms, he said.

As of now, the Chinese side has mobilised a large number of troops and armaments along the LAC as well as in the depth areas. There are several friction areas in Eastern Ladakh, including Gogra, Kongka La and North and South Banks of the Pangong Tso. In response to China’s actions, Indian armed forces have also made appropriate counter deployments, he said.

Referring to his meeting with his counterpart General Wei Fenghe in Moscow on September 4 and the subsequent meeting between the foreign Ministers of India and China, Rajnath Singh said “we want to resolve the current situation through dialogue, we have maintained diplomatic and military engagement with the Chinese side”.

In these discussions, India has maintained the three key principles that, determine our approach: Firstly, both sides should strictly respect and observe the LAC; secondly, neither side should attempt to alter the status quo of the LAC unilaterally; and thirdly, all agreements and understandings between the two sides much be fully abided by in their entirety.

The Chinese side also conveyed that the issue be handled in a responsible manner to ensure peace and tranquillity as per bilateral agreements and protocol.

The two sides have reached an agreement that, if implemented sincerely and faithfully by the Chinese side, could lead to complete disengagement and restoration of peace and tranquillity in the border areas.

Referring to the recent incidents along the southern bank of the Pangong Tso, a 135 km glacial-melt lake, Rajnath Singh said the Chinese side engaged in provocative military manoeuvers on the night of August 29 and 30 in an attempt to change the status quo. “Timely and firm action by our armed forces along the LAC prevented such attempts from succeeding.”

Our armed forces have maintained “restraint” in the face of provocative actions, they have also equally displayed “bravery” when required to.

Differentiating from past such stand-offs, Rajnath Singh said in the past too “we have had situations of prolonged stand-offs in our border areas with China which have been resolved peacefully. Even though the situation this year is very different both in terms of scale of troops involved and the number of friction points, we do remain committed to the peaceful resolution of the current situation”.