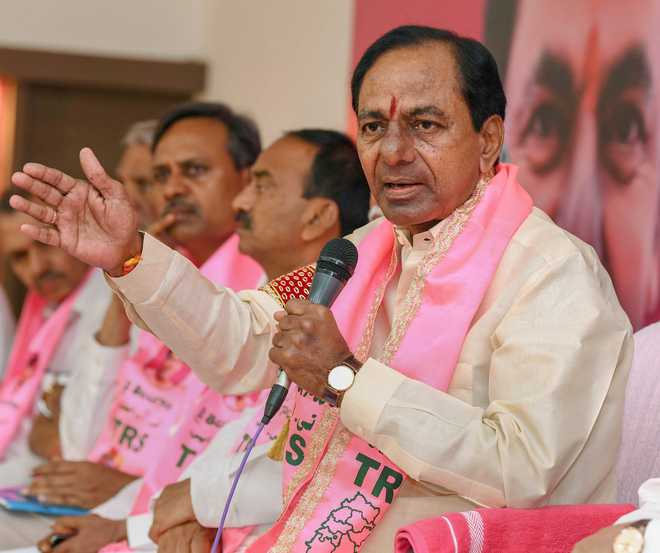 Telangana Rashtra Samithi (TRS) has decided to it go alone in the Greater Hyderabad Municipal Corporation (GHMC) elections that are considered to be a mini state election with 150 Divisions spreading over four districts and over 20 Assembly segments. It released its first list of candidates on over 20 seats.

The TRS working president KT Rama Rao has ruled out any alliance with its friendly All India Majlis-e-Ittehadul Muslimeen (AIMIM) Party and at the same time Chief Minister and TRS president K Chandrashekhar Rao (KCR) has launched the poll campaign by declaring a political war against the BJP for what he calls the “Centre’s for its anti-people, anti-farmer and anti-labour policies”.

Announcing that Hyderabad would become the centre of a movement to unite and bring together non-NDA parties onto one platform, KCR said, “Leaders of non-NDA parties, including Mamata Banerjee, HD Kumaraswamy, Akhilesh Yadav, Mayawati and MK Stalin, will be invited for a meeting to be held in the state capital in the second week of December to give shape and form to the national movement against the regressive BJP”.

Interestingly, KCR did not name Telugu Desam Party (TDP) president and former Andhra Pradesh Chief Minister N Chandrababu Naidu as one to be invited. Naidu was instrumental in forming the “Maha Gathbandhan” against the BJP on the eve of the 2019 General elections when the BJP came back to power with an overwhelming majority of 303 seats in Lok Sabha.

The chief minister took a public jibe at the BJP during a joint meeting of the TRS Parliamentary and Legislative Parties to discuss the GHMC poll strategy with the GHMC division in-charges.

The TRS chief said, “I have already met the Chief Minister of West Bengal (Mamata Banerjee), Kerala (Pinarayi Vijayan), Delhi (Arvind Kejriwal), Odisha (Naveen Patnaik), DMK leader MK Stalin, former UP Chief Ministers and presidents of Samajwadi Party and BSP, Akhilesh Yadav and Mayawathi, respectively, NCP president Sharad Pawar, former Punjab Chief Minister Prakash Singh Badal, the Left parties and others. We decided to work together on the issue of fighting against the policies pursued by the BJP across the country. A meeting with all these leaders will be convened in Hyderabad in the second week of December where we will discuss a plan of action to take forward the movement across the country. We will stand by farmers, workers and the poor who are suffering due to the Centre’s policies.”

The Telangana Chief Minister said he would give a concrete shape to the “unification process” after the GHMC polls, voting for which will be held on December 1 and results will be announced on December 4. After this he would invite all non-NDA leaders to Hyderabad and form an alliance to check the BJP.

He said he was putting the BJP government on notice as Prime Minister Narendra Modi’s government had done nothing for the country in the past six and a half years and had, in fact, pushed it back with false propaganda and wrong policies. “The onus was now on non-NDA parties to reverse the anti-people’s policies pursued by the Centre and the BJP in the wake of the Congress’ passive partisan politics,” he said.