New Delhi, January 10: Delhi Police on Friday released pictures of nine suspects in the Jawaharlal Nehru University violence case and claimed JNUSU president Aishe Ghosh was one of them.

Of the nine, seven belong to Left-leaning student organisations, while two are affiliated to right-wing students’ body, the police said.

Addressing a press conference, DCP (Crime Branch) Joy Tirkey, who is probing the case, said a majority of the students wanted to register for the winter semester from January 1 to 5, but the Left-leaning students’ bodies were not allowing them to do so. 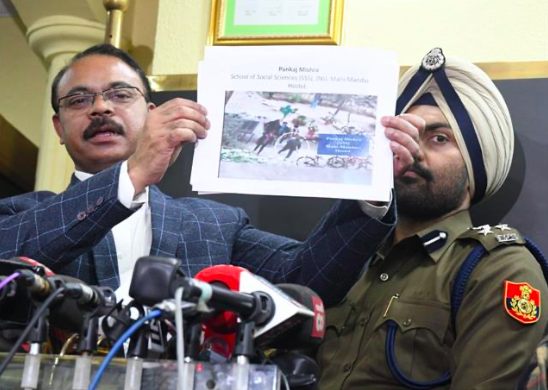 About the attack on January 5, the DCP said that specific rooms in the university’s Periyar hostel were targeted.

Ghosh, who was injured in the attack, however, refuted the charge, saying Delhi Police should make public whatever proof it has against her.

“I too have evidence of how I was attacked,” she said.

JNUSU president Ghosh categorically denied that she had taken part in the violence.

Speaking to the media, Ghosh accused the Delhi Police of conducting biased investigations into the incidents that have kept the JNU campus on the boil since January 5. Claiming to have full faith in the law and order system of the country, Ghosh, however, said it was a wrong act of the Delhi Police to make her a suspect in the violence.

Acknowledging that she was present on the campus, Ghosh denied that she had any part in the violence. She said that photographs do not prove her complicity.

Ghosh also accused the Delhi Police of indulging in similar misinformation in the past too. “In 2016, also they did the same thing. They doctored videos of Kanhaiya Kumar.”

The JNUSU president and her associates reiterated that they would go to any extent to continue the agitation albeit peacefully.

They accused the JNU Vice-Chancellor of behaving like an ABVP president and said that they would not budge on their demand for his removal.