Chandigarh, January 23: Extremely distressed over the cancellation of furlough to her husband, former Chief Minister Om Prakash Chautala, his wife Sneh Lata has told her son Ajay, his wife Naina and grandsons Dushyant and Digvijay not to touch her body after she is dead. 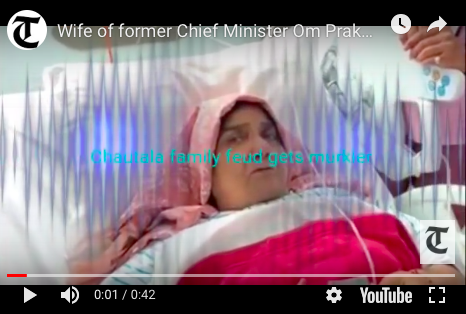 In a video, that has gone viral, she is seen on a hospital bed. “Everyone knows they (Dushyant and Digvijay) are behind the cancellation of furlough. The manhandling of Chautala Sahib at INLD’s Gohana rally (on October 7, 2018) is an open secret. They wanted to inflict bodily injury on their grandfather but he was saved by someone,” she is heard saying, amid sobs.

“… If I die tomorrow, these four persons (Dushyant, Digvijay, Ajay and Naina) should not touch my body. They should not even see my body,” she adds, breaking down again. In another video, while praising Abhay for taking care of her, she blames her daughter-in-law Naina, Dabwali MLA, for “ruining” the family.

The latter, addressing an election rally in Jind’s Pandu Pindara village on Tuesday, while alleging her sons were being hounded by “certain persons,” asked: “If the people of Haryana love Dushyant and Digvijay, are they to be blamed? Have you ever heard somebody cursing her sons and grandsons?” Breaking into tears, she made an ardent appeal to the people to vote for Digvijay. “My grief is genuine. I am not crying to manipulate votes for my son,” she claimed.

On Monday, hours after the Aam Aadmi Party (AAP) announced its support to Digvijay, INLD president Ashok Arora told a press conference that the AAP’s Delhi government had cancelled Chautala’s furlough at the instance of Dushyant and Digvijay. Chautala, speaking to mediapersons at Delhi’s LNJP Hospital (from where he was taken to Tihar jail), reiterated the charge, calling his grandsons “traitors”.

Dushyant and Digvijay rubbished the allegations, claiming they had no role in the cancellation of their grandfather’s furlough. “Had we been so powerful, we would have ensured furlough for our father,” they argued. Om Prakash Chautala and his son Ajay are serving a jail sentence in the JBT recruitment scam.

Except the headline, story has been sourced from The Tribune