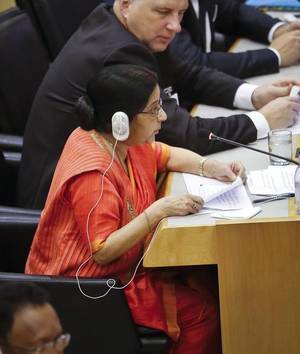 United Nations, Sep 20: India on Wednesday reaffirmed its commitment to the landmark Paris climate change agreement, saying it is willing to “work above and beyond” the pact to reduce greenhouse gas emissions. External Affairs Minister Sushma Swaraj, during a U.N. ‘Leadership Summit on Environment Pact’, said that India had been at the forefront of the debate on environment and development.

Her remarks came amid uncertainty over the U.S. role in the deal after President Donald Trump, in June, announced that America was withdrawing from the Paris deal, arguing that it gives undue advantage to countries like India and China. India, which is the world’s third largest carbon polluter, along with more than 190 nations reached a pact in December 2015 with an aim to prevent an increase in the global average temperature and keep it well below 2 degrees Celsius.

The deal, which replaced the 1997 Kyoto Protocol, was ratified in October 2016. Participating in the U.N. meet hosted by Secretary General Antonio Guterres, Ms. Swaraj said, India was willing to work “above and beyond” the Paris agreement.

“We also mentioned that India and France are working together on international Solar Alliance,” he said. During the day, Ms. Swaraj had a series of bilateral meetings with leaders from Mexico, Norway and Belgium wherein focus was primarily on bilateral relations,

She also called on Mauritius Prime Minister Pravind Jugnauth. “There were some discussions on the possibility of a high-level visit from Belgium to India later this year,” Mr. Kumar said.

Later in the evening, Ms. Swaraj attended a reception hosted by the British Prime Minister Theresa May for the Commonwealth Heads of Government delegations. Ms. Swaraj is scheduled to hold meetings with her counterparts from San Marino, Brazil, Morocco, Moldova and call on Afghan President Ashraf Ghani.

She is also scheduled to participate in several multilateral meetings including that of the G-4 (Brazil, Germany, India, and Japan) and the Shanghai Cooperation Organisation foreign ministers.