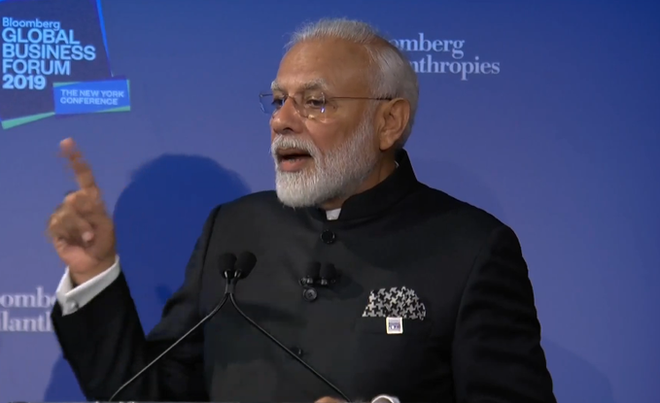 New Delhi, September 25: Prime Minister Narendra Modi told the world’s major businesses on Wednesday that India today offered a never-before opportunities to invest and that the most politically-stable government in decades had the “capability, courage and conditions” to provide investment security and a guarantee of safe growth.

Delivering the keynote address at the Bloomberg Global Forum in New York, the Prime Minister said any investor who wanted to invest in a market of scale should come to India because it currently possessed four major attributes whose combination was not available in any other country.

The Prime Minister then went on to benchmark Indian plans, projects and schemes with global standards—a health insurance scheme that was more than the combined population of North America, investments to the tune of USD 1.3 trillion to strengthen infrastructure, the opening of its defence sector like never before, and investing massively in social infrastructure. Modi had given an indication of his “invest big”’ pitch at the “Howdy Modi’’ rally in Houston on Sunday when he said that instead of incremental change, India was embarking on transformational change.

The Indian growth story, Modi said, had four major factors—“democracy demography, demand and decisiveness”. “No other country possesses this unique combination,” he said.

Switching seamlessly between Hindi and English, even during the question and answer session, Modi underlined the demographic dividend of a young, energetic and a talented pool and increasing demand as India’s population is getting economically empowered. “What today makes India special is decisiveness. In the past five years, we have been creating a seamless, inclusive and transparent system,” he explained.

The Prime Minister dispelled any notions about opposition to reforms and development by telling the audience of CEOs of MNCs that the recent election was a resounding endorsement of ‘vikas’ (development).

“This was a mandate for vikas… People are standing with a government that is taking the biggest and toughest decisions…India has a government that respects wealth creation and businesses,’’ he observed while describing the cut in corporate taxes as “a revolutionary step”.

Democracy, he said, provided political stability, a stable policy environment and an independent judiciary. “This combination won’t be available elsewhere in the world,” he observed.

Modi said social media has become a powerful instrument of democracy and it can be used as a “weapon” for good governance.

During a question-answer session after his address, Prime Minister Modi also asked people to remain vigilant against fake news on social media. Responding to a question on social media, Modi told Michael Bloomberg that he was amused as the question was raised by a media baron.

He said social media can be used in a positive manner for good governance as information can be received from people living in remote areas.