Chandigarh, August 22: Prime Minister Imran Khan on Tuesday came to cricketer-turned-politician and friend Navjot Singh Sidhu’s rescue and thanked him for coming to Pakistan for his oath-taking ceremony.

Imran said Sidhu was an ambassador of peace and was given amazing love and affection by the people of Pakistan. 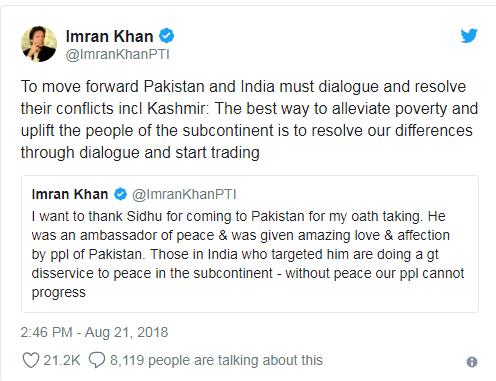 He said those in India who targeted him were doing a great disservice to peace in the subcontinent as without peace people in both Pakistan and India could not progress.

Khan, while speaking to the media in Islamabad on Tuesday, said in order to move forward, Pakistan and India must have a dialogue and resolve their conflicts, including Kashmir.

He tweeted, “The best way to alleviate poverty and uplift the people of the subcontinent is to resolve our differences through dialogue and start trading.”

Back home, the hug has earned Sidhu a sharp rebuke from his former party, the BJP, which called it a “heinous crime”.