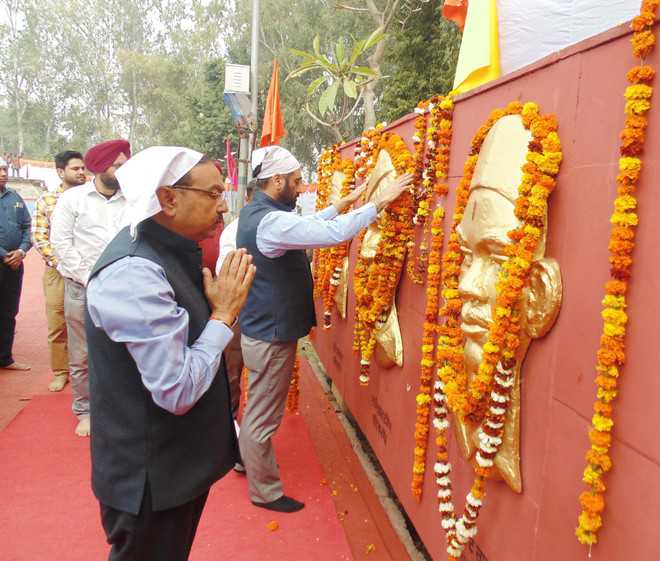 Chandigarh, March 23: Though no state level function could be organised due to the election code of conduct being in place, thousands of people from all walks of life paid floral tributes at the samadhi of Bhagat Singh, Rajguru and Sukhdev on the occasion of the Shaheed Diwas at Hussainiwala on Saturday.

On the occasion, Khaira demanded that the Chandigarh airport be named after Bhagat Singh. “The government should provide due recognition to our national heroes,” he said.

Sodhi exhorted the youth to shun drugs and contribute their might to realise the dreams of the martyrs.

At Khatkar Kalan, though no political party organised any rally on the occasion, several youths, clubs, general public and some politicians paid tributes to Bhagat Singh at his memorial.

The youths donning yellow turbans in Bhagat Singh style raised slogans and paid respects at his statue. They recited poems about the martyr’s contribution to the country’s freedom struggle, bringing alive the patriotic spirit of the place.

Industries Minister Sunder Sham Arora, AAP state convener Bhagwant Mann and Lok Insaaf Party MLA Simarjit Singh Bains visited the Memorial and paid tributes to the freedom fighter. The leaders first chose to say a few words about the occasion and then shifted their narrative towards the state’s politics.

On no tie-up with the SAD (Taksali) owing to rift over the Anandpur Sahib seat, Mann said, “We could not bargain on this seat as we have our three MLAs from the Assembly segments of this seat – Kharar, Ropar and Garhshankar. We consider it as our stronghold.”