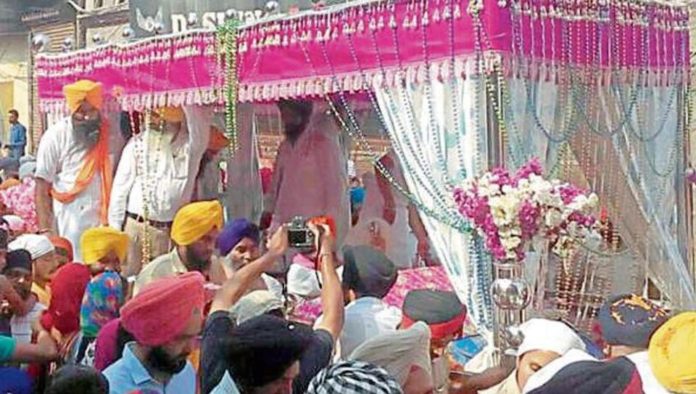 Batala, Aug 29: Ever heard of a marriage attended by lakhs of ‘baraatis’? Probably not. Every year, Batala plays a host to a wedding called Babe da viah in which ‘baraatis’ come from as far as Ber Sahib Gurdwara in Sultanpur Lodhi, and the groom is none other than the first Sikh guru, Guru Nanak Dev and the bride is Mata Sulakhni Devi. 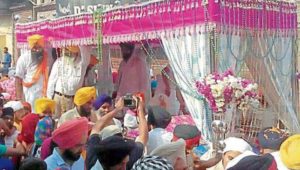 Gurdwara Kandh Sahib- a shrine seeped in a rich tapestry of Sikh history because of its association with the first Sikh guru- remained the cynosure of all more than 2 lakh devotes from all over the world.

Embodied in Guru Granth Sahib, placed in a palanquin, the procession passed through the main bazaars of the town. Lakhs of devotes converged at the Gurdwara Kandh Sahib to celebrate Guru Nanak Dev’s 530th wedding anniversary.

The spirit of the occasion was epitomised by 95-year-old Avtar Singh who travelled all the way from Wadala Granthian village. He stood in the serpentine queue for four hours, was jostled by the crowd, but still kept his nerve. The entire town wore a festive look with decorations put up on all the roads leading to the gurdwara.

A cleanliness drive was launched in the town and the city was decorated with lights and flowers. To be chanted 101 times, the ‘akhand paath’ of Guru Granth Sahib has started across the town and ‘bhog’ ceremony will be performed on Saturday morning.

The ‘shobha yatra’, led by the Panj Piaras, began from Gurdwara Dera Sahib, carrying guru Granth Sahib Palki, followed by Ragi Jathas singing hymns in the praise of Guru. The display of ‘gatka’ and beating of ‘nagaras’ by ‘nihangs’ were also a part of the procession.

Guru Nanak Dev was married to Bibi Sulakhni, daughter of Mul Chand Khatri, who was a revenue official at Batala. It is said that during the wedding Guru Nanak was made to sit along a mud wall. Teasing the groom, his sister-in-law told him not to sit near the wall as it could collapse anytime. Then Guru Nanak said that the wall will not collapse till life existed on earth. The mud wall continues to stand till date and has been encased in glass and preserved for posterity.