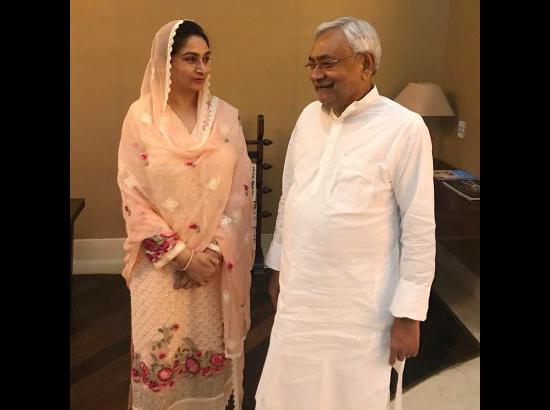 Chandigarh, April 12, 2018: Union food processing minister Harsimrat Kaur Badal today met Bihar chief minister Nitish Kumar and requested him to support her demand for exempting ‘langar’ from imposition of GST in the GST Council for all gurdwaras in the country. 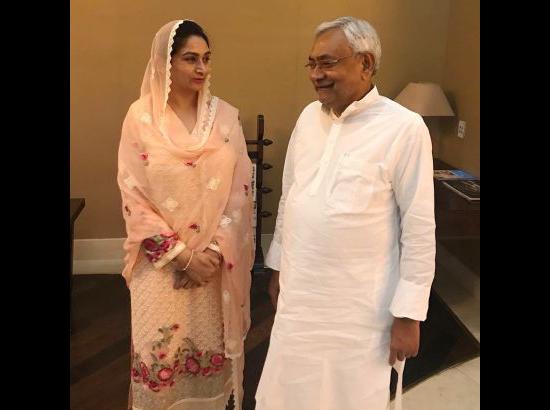 Mrs Harsimrat Badal, who met the Bihar chief minister in Delhi, said Mr Nitish Kumar has asked his finance minister to take up the issue appropriately in the GST Council. She said the Bihar chief minister also assured to demand waiver of GST in support of her demand and work towards the cause of creating a consensus on this issue by personally conveying the sentiments of the Sikh community to the central government.

The union minister said she had started an initiative to approach chief ministers of various States so that this issue could be redressed quickly. She said she would soon meet Maharashtra chief minister Davendra Fadnavis and request him to extend support to this noble cause.

Mrs Badal said she was taking this step because the Congress government in Punjab had fallen woefully short of fulfilling this responsibility. “Despite the fact that the erstwhile SAD-BJP government had exempted all items purchased by the Shiromani Committee for ‘langar’ at the three Takths at Sri Darbar Sahab , Amritsar, Sri Keshgarh Sahab , Anandpur and Sri Damdama Sahib, Talwandi Sabo from VAT, the Congress government did not make any attempt to move for a similar exemption under the new GST regime. “It has been more than one year now but still the Punjab finance minister has not tried to create any consensus on this issue in the GST Council. I have now taken up this task as I feel it is my bouden duty to work towards this goal as it concerns the sentiments of the entire Sikh community worldwide”.

The Bathinda MP disclosed that she was the first to raise the need for doing away with GST on ‘langar’ earlier and had raised this issue with Prime Minister Shri Narendra Modi also during the recently concluded budget session. “I will be taking up the issue with finance minister Arun Jaitely again once he recuperates from his recent hospitalization. I will impress upon him to exempt ‘langar’ from imposition of GST in all gurdwaras in the country. I also appeal to the Punjab government to waive off its half share in GST due from all gurdwaras in Punjab”.

Mrs Badal said the concept of ‘langar’ was started centuries ago by Sri Guru Nanak Dev ji to propagate the concept of equality in society regardless of religion, caste and creed. She said the Golden Temple ran the world’s largest kitchen offering free melas throughout the year to lakhs of people who visited the holy shrine in Amritsar. “The SGPC spends around Rs 75 crore annually to purchase desi ghee, sugar and pulses. Now it will have to bear an additional financial burden on these purchases as they come under 5 to 18 per cent GST bracket. This should be dispensed with as soon as possible”.