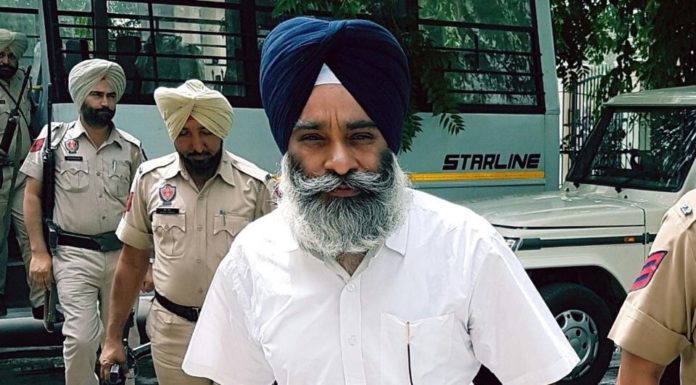 Khalistan Liberation Force (KLF) chief Harminder Singh Mintoo died of cardiac arrest today in Patiala Central Jail where he was lodged. Sources said that for past more than a year Mintoo was lodged in the jail.

As the news of Mintoo’s dead came senior intelligence officials rushed to the Patiala Central Jail to ascertain the detailed cause of his death, as his links with ISI and various international spy agencies were under scanner. He along with five other dreaded gangsters had escaped from Nabha jail in a sensational jailbreak on November 28, 2016, only to be arrested a day later from Nizammuddin railway station in Delhi.

Around eight armed men had stormed Nabha jail and opened fire and helped Mintoo, besides four other gangsters Gurpreet Singh, Vicky Gounder, Neeta Deol and Vikramjeet Singh allias Vicky to escape from jail. In November 2014, Mintoo was arrested by Punjab Police from the Indira Gandhi International airport on his return from Thailand. He was using a fake Malaysian passport and identity card.

At the time of his arrest, Mintoo was accused of being involved in ten terror-related cases including the attack on Dera Sacha Sauda chief Gurmeet Ram Rahim Singh and on three Shiv Sena leaders. He was allegedly told by the ISI to carry out an attack in Punjab on Independence Day but he could not do so.

He was using Thailand as his base to mobilise funds for his banned organisation and was using online resources to enlist support for the Khalistan cause and also to radicalise youth. Mintoo had widely travelled extensively across Europe and South East Asia in order to develop contacts and frequently visited Pakistan from where he got funds and support.

Additional Director General of Police (Prisons), Punjab, IPS Sahota has ordered a judicial inquiry into the death of Mintoo. He said Mintoo felt uneasy before appearing in a video-conference in an ongoing trial. He attended the video conferencing in the afternoon and after that he was in his cell when he suffered a cardiac arrest. The jail doctors treated him before he was rushed to Rajindra Hospital.