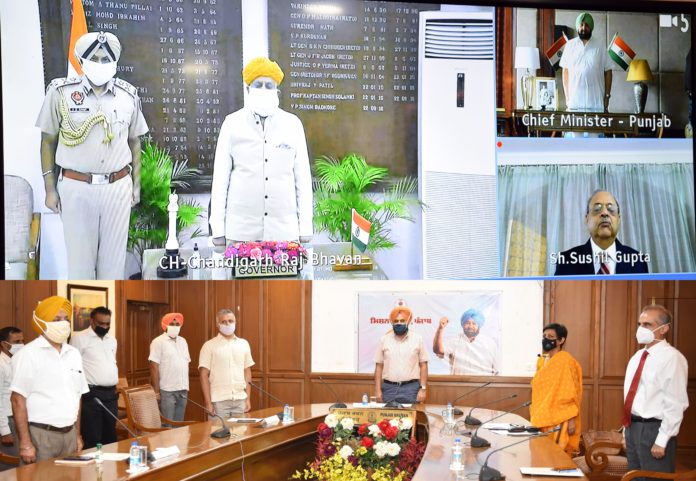 Earlier, Punjab Chief Secretary Ms. Vini Mahajan sought the permission of the Governor to start the oath taking ceremony. After the ceremony, while congratulating the newly appointed Chairman and members, Punjab Governor Mr. V.P. Singh Badnore and Punjab Chief Minister Captain Amarinder Singh wished them all the best for their future endeavors.

After the brief meeting with the newly appointed Chairman of Punjab Water Regulation and Development Authority Mr. Karan Avtar Singh, Water Resources Minister Mr. Sukhbinder Singh Sarkaria said that the authority has mandated for management and conversion of water resources of the state in a judicious, equitable and sustainable manner, and has empowered to take all such measures as it deems necessary for this purpose. He envisioned that authority would definitely augment the state government’s sincere efforts to save the critical water resources. Mr. Sarkaria said that the authority has been empowered to issue directions and guidelines for the conservation and management of the state’s critical water resources.

The Minister further said that the authority would further ensure development, management and conservation of water resources of the State in accordance with the Integrated State Water Plan. He said that the authority has also been mandated for ensuring efficient use of water and to minimize the wastage or misuse of water and to promote recycling and reuse of water. Mr Sarkaria said that Authority would from time to time, issue advisories to the Government regarding policies and programs for development, management and conservation of water

Adding that the Authority would also carry out or cause to be carried out surveys, investigations and research relating to conservation, usage and quality of water. Principal Secretary Water Resources Mr. Sarvjit Singh and other officials were also present on the occasion.