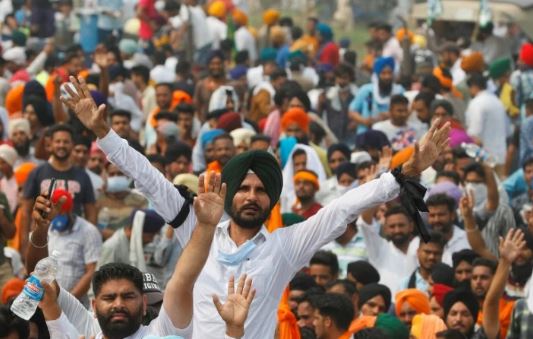 With both the Central and Punjab governments inviting protesting farmers for talks, the first chinks in the unity of kisan unions have begun to show.

The largest kisan Union—Bhartiya Kisan Union (Ekta Ugrahan) is in no mood to relent on the farm laws enacted by the Centre and remain steadfast in their stand that the laws be repealed. They say they will not be going in for talks with the Centre. The other Unions are, however, are yet to decide on whether they want to go in for the meeting with the Centre, scheduled for October 14.

A meeting of the farmer unions has been convened here on Tuesday morning to decide the next course of action, though BKU (Ekta Ugrahan) says it is not part of this meet. Joginder Singh Ugrahan, president of the largest kisan union, told The Tribune that their protest was on at 51 places, and would continue till the time the laws were revoked. “Our union is not going for the meet. We have our own protest programme charted out,” he said.

Last week, another kisan Union, BKU (Lakhowal), had been asked to stay out from the joint protest, after they approached the Supreme Court against the agriculture laws, without taking other protesting unions into confidence.

The consortium of farmers’ unions (other than Ugrahan and Lakhowal factions) have also been taking legal advice on whether a constitutional guarantee for minimum support price (MSP) would act as protection against corporatisation, as intended in the new laws passed by Parliament last month, confirmed Jagmohan Singh, general secretary of BKU (Dakaunda).

He said a middle path would have to be found, but one where there is a complete guarantee on protesting for the economic and other interests of farmers.

The Centre, through its Secretary, Agriculture, Sanjay Agarwal, had invited farmers for talks last week. The proposal was rejected by farmers’ unions. In a fresh invite for talks, sent on Sunday, the Centre has said, “…the Indian Government is serious about agriculture, this is the reason they want to talk to you….”

Darshal Pal of Krantikari Kisan Union, however, said they were to take a final call on going for the meeting with the Centre on Tuesday. “We had rejected the first offer because we wanted to talk only to the Prime Minister or a group of ministers deputed by him. We are still not sure who will be talking to us,” he said.

On Sunday, the Punjab government had sought a meeting with the protesting farmers, who have occupied rail tracks at more than 200 places in Punjab. A three-member committee of the government wanted to discuss the further course of action with the protesting farmers, who have so far not given any consent to the meeting. “We might meet the Punjab government delegation of three ministers (Tript Rajinder Singh Bajwa, Sukhbinder Sarkaria and Sukhjinder Randhawa) after we decide our next course of action on Tuesday,” said Jagmohan Singh. BKU (Ekta Ugrahan) president Joginder Singh said they had not been invited for the talks.