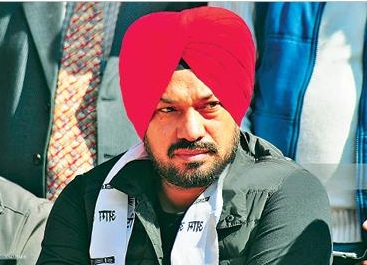 Chandigarh, May 11: The Shiromani Akali Dal said the resignation of former Punjab AAP convener Gurpreet Singh Ghuggi from the party was a result of AAP’s moral degradation, which, according to Ghuggi had chosen to appoint a drunkard as president of the state unit.

In a statement, party secretary general Sukhdev Singh Dhindsa said what all right-thinking Punjabis had been claiming for long was today vindicated by Ghuggi.

“It is also shameful that AAP convener Arvind Kejriwal, while appointing Mann, enjoined the latter not to drink for three months or he will be removed. Ghuggi is right in pointing out that Kejriwal could have given Mann three months to reform himself and cure himself of his drinking habits.”

Dhindsa said:“Kejriwal should tell Punjabis why he has imposed such a person on them. Earlier, he imposed a team of outsiders from Uttar Pradesh who were accused of selling party tickets and indulging in immoral acts. Now when there were a number of candidates available for appointment as the state party chief, he again cheated his party men.”