Down to 3 states, Congress slams ‘theft of mandate by BJP’ 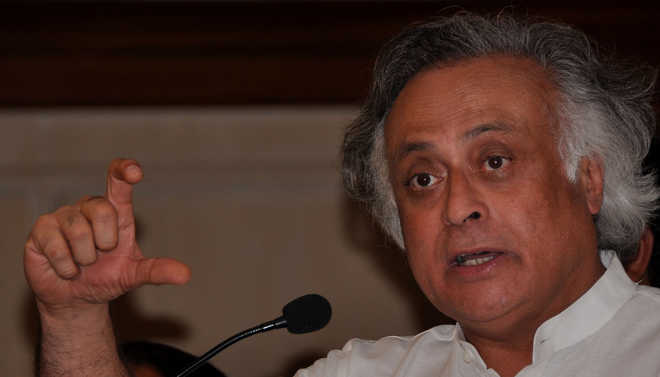 Reduced to power in only three states (Rajasthan, Chhattisgarh, Jharkhand) after the fall of Maharashtra government on Thursday, the Congress slammed “theft of mandate” by the BJP and alleged that saffron forces were buying MLAs so routinely that FM Nirmala Sitharaman today suggested a GST on horse trading.

After Shiv Sena rebels toppled Maha Vikas Aghadi, the Congress now retains power on its own in Rajasthan and Chhattisgarh and as an ally in Jharkhand.

In the DMK led Tamil Nadu, Congress is not in the government.

After the party’s electoral base shrunk further today, AICC general secretary Jairam Ramesh cited past instances to say this was not the first time the BJP had subverted a mandate.

Ramesh cited how the BJP in 2016 “brought down the Congress government in Uttarakhand.”

“The government elected for five years was reduced to a minority in four years through defections. The same year, in Arunachal Pradesh, 43 out of 44 Congress MLAs were made to defect to the BJP-backed Front- People’s Party of Arunachal under CM Pema Khandu,” Ramesh said.

In 2017, the Congress said, it was the single largest by winning 28 out of 60 seats in Manipur and the BJP had 21 seats but the Congress was not given a chance by the Governor to prove its majority.

“Same thing happened in Bihar in 2017. The BJP unethically toppled the ‘Mahagathbandhan’ government that lasted 20 months. In 2019, Congress-JDS coalition was toppled in Karnataka. In March 2020, a conspiracy was hatched in Madhya Pradesh. In June 2020, eight MLAs of Gujarat Congress were made to join BJP, only to win Rajya Sabha elections. In 2021, a similar story repeated in Puducherry. Even before the assembly elections, the BJP toppled the Congress government in the state,” said Ramesh.

The Congress also recalled how in November 2019 in Maharashtra, Devendra Fadnavis took oath along with 10 defected NCP MLAs at midnight but then withdrew unceremoniously.

“In Rajasthan, BJP tried to mislead 19 Congress MLAs, but their machinations failed,” Ramesh mentioned as the Congress geared for a tough season ahead in the run up to 2023 elections in Rajasthan, Chhattisgarh, MP and Karnataka.

Meanwhile the party continues to brave the exit of stalwarts, with insiders saying many more would leave in the days to come.