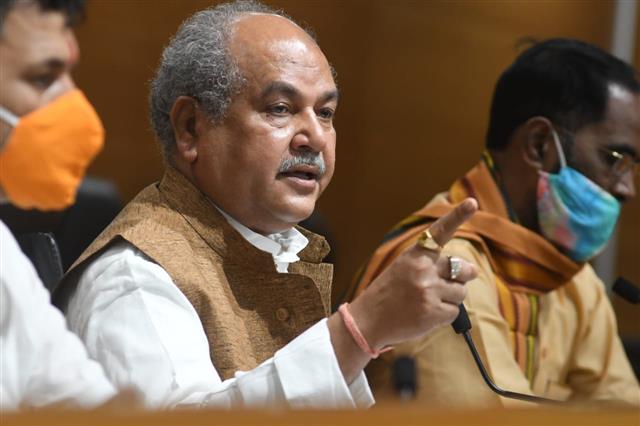 A day before countrywide farmers’ agitation, Agriculture Minister Narendra Singh Tomar on Thursday accused the Congress of “lying and misleading” while assuring farmers that the three “historic” agri-legislations passed by the Parliament were for their “better future and prosperity in the agriculture sector”.

Slamming the Congress “for doing petty politics on matter related to farmers’ future even while it promised very same reforms in its poll manifestos,” Tomar also said “if farmers want any discussion on the bills, they are most welcome, our doors are always open”.

Notably several farmers and farm-worker, including the All India Kisan Sangharsh Coordination Committee (AIKSCC), have given a call for a ‘Bharat Bandh’ on September 25. Terming the legislations “undemocratic and anti-farmer”, Indian Coordination Committee of Farmers Movements (ICCFM) national convener Yudhvir Singh said farmers will observe complete ‘bandh’ in protest against the Central government’s move.

The ICCFM is a non-partisan national alliance of farmers movements representing 12 farmers’ organisations across India based in UP, MP, Rajasthan, Karnataka, Tamil Nadu, Punjab and Haryana, Singh said. “We oppose both the process and the substance of these bills. When seen in totality, these bills have nothing to do with improving farmers’ incomes, over 80% of who are small and marginal farmers. Instead, they will empower agribusiness and increase corporate control of our food systems, leaving farmers and consumers with little recourse to justice,” he added.

However, according to Tomar, the legislations will change the lives of farmers and the sector for the better. “Check the records and see what Kamal Nath (former Madhya Pradesh Chief Minister) had said at the high-level chief minister’ meeting. He (Kamal Nath) said it on record that Essential Commodities Act has achieved its purpose. What the government has done is what the Congress promised in Punjab and in its 2019 Lok Sabha manifesto. The party should stop lying and doing politics on matters concerning farmers,” Tomar said while speaking to mediapersons at the BJP headquarters.

Reiterating the BJP-led NDA’s commitment on the MSP and the APMC, Tomar said private players at the village level will help and encourage small farmers grow high-value produce. “The Narendra Modi government is committed to farmers and agriculture,” Tomar said, assuring farmers “complete freedom and better prospects” in a “tax-free environment”. “Farmers will gain…you will see what all happens because of increased competition…The Punjab government has already reduced tax on basmati rice,” he said.

“Those who are questioning why MSP has not been included in the legislations are those who ruled the country for past 50 years and still did not make a law on it. Why did you (the Congress-led UPA) not make a rule on the MSP,” Tomar questioned, adding that the minimum support price is an administrative decision of the Centre and will remain.

“The proof is the announcement of Rabi MSP even before sowing. During the debate in the Lok Sabha and the Rajya Sabha, the Opposition parties did not have any objection to any provision in the legislations, their only objection was on something (MSP) which is not even their part,” Tomar said.