Only cow hospital in Punjab, signs of sword and acid attacks on bovines 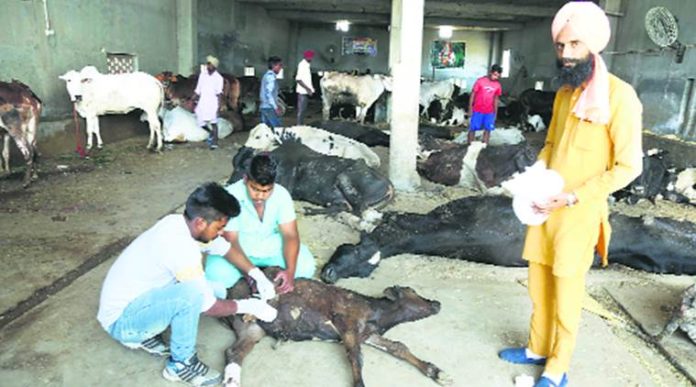 Jagraon, July 14: At a huge shed in Punjab’s only Cow Hospital a cow writhes in pain; fresh blood seeps through bandages that have been used to cover stab wounds in its stomach and legs. Just when the animal looks like it may lose consciousness, a group of workers haul it into a corner, where a mobile intravenous drip is rushed in and a needle is inserted into its foot. 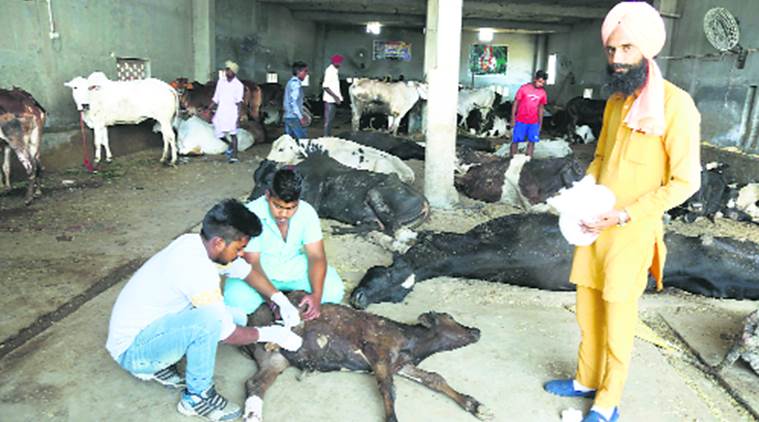 Faced with increasing numbers of stray cattle and tighter regulation regarding the sale of their ageing livestock, farmers in Punjab are resorting to cruel methods to get rid of them, says Kulwinder Singh, (38), who runs the Baba Gau Hira Hospital, which treats injured cows, at Kaunke Kalan village in Ludhiana district. “Stray cows are being attacked with acid and swords and are being burnt with matchsticks. Some even have pepper applied in their eyes and udders. Each month we rescue at least 60-70 such cows,” he says.
Even those left on the roads and streets have it no better, says Kulwinder. “We find all sorts of human waste, iron objects, plastic and garbage in the stomachs of dead stray cows. It is what the abandoned animal has been feeding on for months,” he adds. As per the state-run Punjab Gau Sewa Commission, over one lakh stray cattle roam Punjab’s streets, most of which are the exotic cross-bred Holstein Friesian (HF) cows, generally abandoned by farmers after they turn infertile or stop providing milk.

Kulwinder’s facility, some 40 km from Ludhiana, houses some 115 wounded or diseased cattle, 90 per cent of which are HF cows. While the veterinary hospital at the Guru Angad Dev Veterinary and Animal Sciences University (GADVASU) treats all sorts of animals and there are privately-run cow shelters, the Baba Gau hospital is the only one that exclusively treats injured cows.
Kulwinder began work in 2011, initially rescuing stray cattle before opening the ‘cow hospital’ on half an acre of land handed over by a village resident. He runs the facility through donations and monetary help from his brother in the US. “Some farmers give us fodder and some veterinarians don’t take fees. We still spend at least Rs 3 lakh a month, which includes the salaries of around 14 employees and most importantly medicines and fuel for our ambulance,” he says.
The ambulance, fitted with a hydraulic ramp, was bought last year at a cost of Rs 6.5 lakh. “We bought it in instalments and now it is convenient to rescue cows from nearby districts too,” says Kulwinder, dressed in a orange kurta and turban.
The hospital has a 24×7 helpline number (82733-82733), which receives calls regarding injured animals from Jalandhar, Barnala, Amritsar and, Pathankot. Once a call comes in, it sends an ambulance and its workers to pick up the injured animal. Cows that are successfully treated are shifted to the Faridkot gaushala with which the centre has a tie up.
The 38-year-old says his love for cows is not due to religious conviction. “I opened this cow hospital because I cannot see them in pain. It is inhumane to leave them dying on the roads after using them for milk and other benefits,” he says. He also says he has not received any help from either the state or central governments. “My file for free power supply for the hospital is pending with the administration for months. Not a single politician from the BJP or Congress or any other party has offered us any help. We don’t need it but then how are you a gau rakshak if you can’t help those actually working for cows?” asks Kulwinder.
While he highlights the cruelty being shown to stray cattle, Kulwinder believes it is the handiwork of some errant farmers. “We are not in favor of slaughtering any animal but genuine traders should not be harassed. Farmers need to be educated about the benefits of indigenous varieties and the correct ways to manage the HF breed,” he says. Daljit Singh Gill, president, Punjab Dairy Farmers Association (PDFA), the largest association of dairy farmers in the state, admits there is a problem but adds that it is only “bound to increase”. “Small farmers are going through hell as their crops are being damaged by stray animals. Now with Yogi Adiyanath becoming the CM of Uttar Pradesh, cattle trade has become more difficult. How can farmers be blamed for attacking animals destroying their crop?” Gill asks.
Dr A S Nanda, Vice-Chancellor, GADVASU, says,”We in India talk about cow welfare but abandon them on the roads. In England, for instance, cow slaughtering is not banned but their cattle welfare index is way higher than us.”
Punjab Gau Sewa commission chief Kimti Bhagat says the government is looking at ways to reduce stray cattle numbers. “We are working on viable methods like importing of semen from the US to produce only female cattle, which farmers don’t abandon,” he says.

Share
Facebook
WhatsApp
Print
Previous article
Would you like to listen ‘Teri Deevani’ from Pav Dharia?? Then here it is…
Next article
2 lakh arms licences issued in last 10 years under scanner