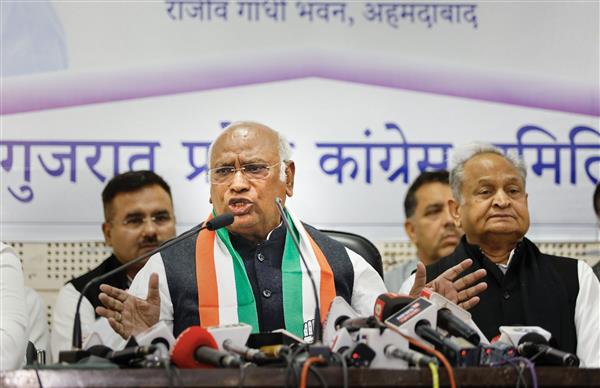 Kharge questioned whether any leader of the Bharatiya Janata Party (BJP) had fought for the freedom of the country.

“We have done the work to fight against terrorists. To maintain peace in the country, we have sacrificed our leaders. Indira Gandhi sacrificed her life to keep the country united. Rajiv Gandhi was martyred for the unity of the country. Is there a leader in the BJP who at least fought for the freedom of the country?” Kharge asked.

Addressing a rally in Kheda in poll-bound Gujarat on Sunday, the Prime Minister had said Congress views terrorism from the prism of the vote bank”. He also said, “terrorism was not over yet and the politics of the Congress has also not changed”.

“Here (in Congress), we have lost our two famous and world-respected prime ministers to strengthen and unite the country. This is an election of the state Assembly and not of Parliament. We are here before you with the issues affecting the state. It is better if he (Modi) talks about the successes and failures of the state,” Kharge said.

On the BJP’s poll promise of implementing the Uniform Civil Code in Gujarat, Khrage said it was an attempt to divide society and create controversy for votes.

“They (BJP) are provoking Congress and other leaders to speak up and get angry. Their aim is to provoke us and divide society, but we are not going to fall into their trap,” he said.