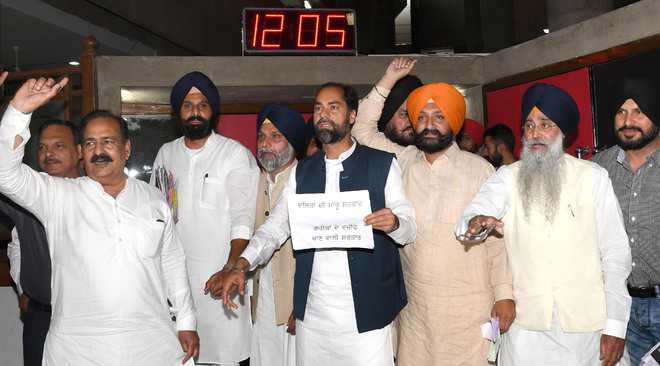 Chanidgarh, March 23: A demand during the Zero Hour by Leader of Opposition Sukhpal Khaira, seeking adequate compensation for the aggrieved families of the Punjabis killed in Iraq, led to heated arguments between the Congress men and the Akalis even as Chief Minister Capt Amarinder Singh promised relief as per norms.

The dramatic situation eased with a half-an-hour adjournment.

While Congress MLAs said it was the duty of the BJP-led NDA government to compensate the families, the Akalis accused the Congress of politicising the tragedy.The atmosphere got charged up when Local Bodies Minister Navjot Singh Sidhu used hard-hitting words against Bikram Majthia associating him with drug trade.

Congress’ Rana Sodhi and Kushaldeep Dhillon suggested that all MLAs, cutting across party lines, should approach the Centre to seek Rs 1 crore compensation and a job for each of the families.

Capt Amarinder backed the demand, saying that the Centre should chip in since the tragedy took place overseas.The CM said he had ordered the release of Rs 20,000 monthly pension to the bereaved families for February and March, waiving the condition of quarterly payouts.

The deputy commissioners had been told to disburse the amount immediately.Dismissing Majithia’s claim that the families had not been paid for six months, Amarinder said payment had been made till January.

The CM said he was in touch with the External Affairs Minister and had been told that the bodies of the ill-fated Punjabis would land at Amritsar airport once the requisite formalities were completed by : the Mosul authorities in Iraq.