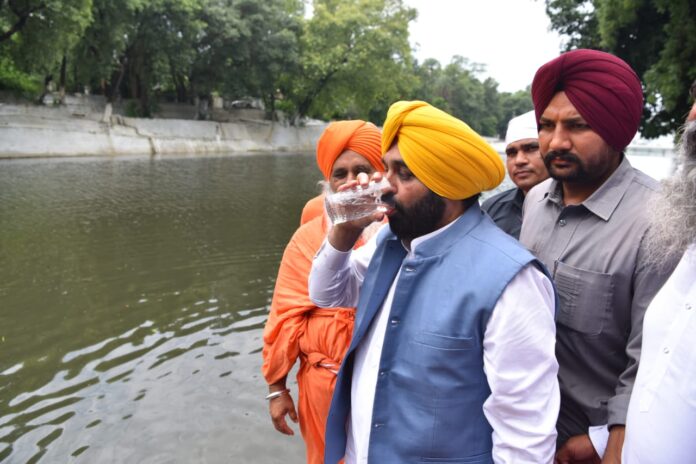 Punjab Chief Minister Bhagwant Mann today announced the launch of a statewide campaign to clean rivers and drains of the state.

Addressing a gathering here during a function to mark 22nd anniversary of cleaning of holy Kali Bein, the Chief Minister said that Punjab is a sacred land of great Gurus and saints, who have shown us the way to preserve the environment. He said that following in the footsteps of the Gurus, the state government will soon embark upon a massive campaign to clean the natural resources in form of rivers and drains in the state. Bhagwant Mann said that while there is no dearth of funds for this noble cause, he called upon people to support it and make the campaign a mass movement.

He also said, that the state government was making concerted efforts to enhance the green cover in the state, for which Shaheed Bhagat Singh Haryiwal Lehar has been started. Bhagwant Mann urged the people to come forward in large numbers this campaign to support the campaign to make Punjab clean, green and pollution free.

Quoting from the Gurbani, the chief minister said ‘Pawan Guru, Paani Pitaah, Mata Dharat Mahat’ which explain how our Gurus have equated air (pawan) with teacher, water (paani) with father and land (dharat) with mother. Unfortunately, the word of the Gurus has not been honoured by us, as we have polluted all these three, he added. Bhagwant Mann said that now the time has come when we must imbibe the teachings of Gurbani in letter and spirit to restore the glory of state.

The Chief Minister said that the Corona wave has taught us the importance of trees, as people spent huge amount of money to get artificial respiratory system in form of oxygen cylinders. Whereas, trees are our natural source of oxygen so each one of us should focus on planting more and more saplings for enhancing green cover and saving our coming generations.

Slamming the previous state governments for ruining the ecosystem of the state, the Chief Minister said that it is unfortunate that those who were entrusted the responsibility of serving the state had ruined the ecosystem for their own vested interests. Elaborating on this, Bhagwant Mann said that those Ministers who were supposed to enhance green cover by planting trees did the opposite by mercilessly allowing felling of trees and claiming commission from it.

Lauding the efforts made by Sant Baba Balbir Singh Seechewal for cleaning of Kali Bein, the Chief Minister said that the historic initiative taken around 22 years ago had acted as a catalyst in cleaning this holy bein, where Sri Guru Nanak Dev ji used to have bath. He said that such efforts needs to be replicated at a mass level to carry forward the legacy of great gurus. He assured full support and cooperation for this noble task.

Welcoming the Chief Minister, renowned environmentalist and Rajya Sabha Member Sant Baba Balbir Singh Seechewal, apprised him about the efforts made for cleaning of the Bein in the past 22 years. He also stressed on the need to clean Buddha Nullah and Chitti Bein on the same pattern with active support of the state government.

Earlier, the Chief Minister also planted a sapling on the bank of Bein. Bhagwant Mann also drank water from the Bein and said that he was blessed to have got this opportunity.